Are you interested in finding a unique and fun-loving designer dog?

If so, then the Cheenese hybrid breed may be just what you are looking for. These cute pups are energetic, loyal, and very small. They are often referred to as designer dogs or hybrid dogs because they are a cross breed between two popular dog breeds. To be specific, a Cheenese is a cross between a Chihuahua and a Havanese purebred.

This breed will inherit several characteristics from each of its parents. It also maintains the relatively small size of both breeds. Their appearance is rather unique as they are very small with long hair. Let’s look at some of the characteristics of the parent breeds, of this particular breed, and then you can decide if this dog is right for you.

Chihuahuas are among the most popular dog breeds in the world. The Cheenese will take quite a few characteristics from its chihuahua parent. The degree of these characteristics will depend on how purebred the chihuahua line is prior to the cross with the Havanese. Here are some qualities of most chihuahuas that you can expect to see in the hybrid.

Personality. Perhaps the chihuahuas most dominant quality is its personality. These are small dogs, but they don’t seem to know it. They are often full of energy, very outgoing, and don’t mind confrontation with larger dogs. Of course, that won’t stop them from running and hiding behind their owner after barking a few times.

Intelligence. This also happens to be a highly intelligent breed. They are often seen in dog competitions where agility and obedience are tested. A chihuahua that is properly trained will have no problem following orders. It is highly recommended to train these dogs, otherwise there energetic and dominant personalities can become troublesome.

Trainability. Their trainability is clearly a result of their intelligence. Some small breeds have a difficult time learning and following commands, but this is clearly not the case with the chihuahua or with the resulting Cheenese hybrid. The key to training this particular breed is having the right reward in store.

Appearance. Of course, the hybrid takes physical features from both of the parents. Chihuahuas are easily one of the most recognizable dog breeds out there (and not just because of their previous roles in Hollywood or certain chain restaurants). They tend to stay under 9 inches tall at the shoulder and rarely weigh as much as ten pounds. Most chihuahuas have short hair, though this is a trait not often passed to the hybrid breed.

Most people won’t hesitate to list the Havanese as one of the cutest dog breeds in the world. These dogs were originally bred as companions to Cuban aristocrats in the 19th century. Their big eyes, small size, and long hair have always won them a lot of attention and praise.

Like their chihuahua companions, the Havanese breed is often seen in dog sporting competitions and shows. Not only can they win awards for their groom and appearance, but they are very energetic and can tackle various obstacles with agility and determination. They have even been seen partaking in circus acts.

They seem to know just how cute they are and demand a lot of attention. It’s not uncommon for this breed to suffer from separation anxiety if left alone for too long. Likewise, they don’t like the cold, despite having such a long, luxurious mane of hair. Here are some of their dominant qualities that are often carried over to their hybrid offspring.

Friendliness. Unlike chihuahuas, the Havanese have no quarrels with strangers. They will gladly run up and play with anyone, where a chihuahua might bark and hide from newcomers. This is breed is friendly with children, adults, other dogs, and even other animals like cats (though the latter may not care too much for them).

Trainability. Once again, this is a dog breed that can be easily trained and it is highly recommended to do so. They have a lot of energy and they love attention. Combine those two and you get a dog that will enjoy lengthy training sessions and the rewards that come with it. That’s why these dogs make such great companions and athletes. However, their energy and curiosity can sometimes get in the way and distract them.

Grooming. Not necessarily a positive trait, but one that definitely carries over to their children. Havanese look great, but it takes a lot of work to keep them clean and groomed. They are at constant risk of shedding if not properly cared for. You might also find yourself with one who likes to drool a little too much. 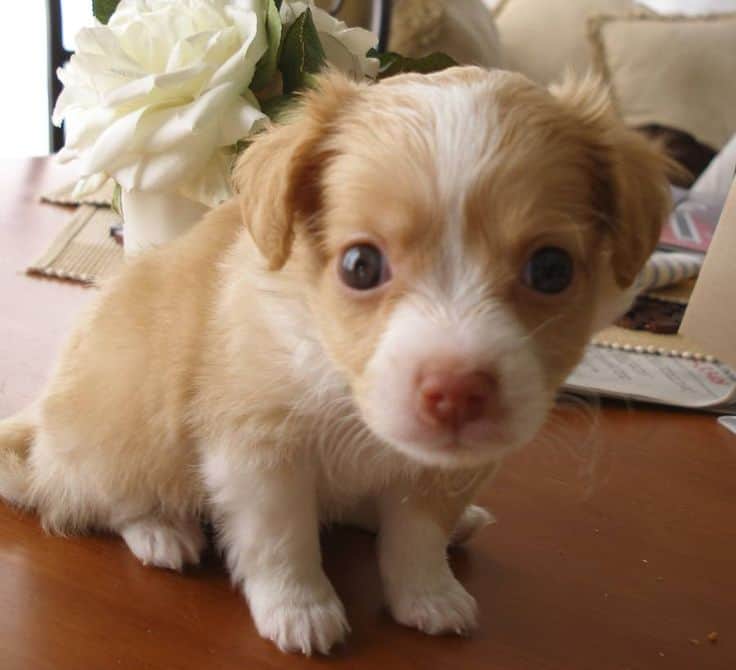 It’s not a guarantee that the children will have certain features from either parent. It’s safe to assume it will be a random mix, which makes it important to understand both parents in-depth before choosing a new puppy.

About the only qualities you can expect no matter what are the small size, big eyes, and long hair that come from the Havanese parent. Here are some qualities that you are likely to encounter with the hybrid, though they are not guaranteed.

Grooming. In most cases, they don’t require as much grooming attention as the Havanese parent, but still more so than your average chihuahua. This is mostly in part to their medium-to-long fur. It’s usually not as long as the iconic Havanese fur, which makes it somewhat easier to maintain.

You should still be prepared to care for grooming on a fairly regular basis. Shedding is likely to occur so always keep a vacuum cleaner ready. You can reduce the impact of shedding by regularly brushing their fur.

Training.  Cheenese dogs are a mixed-bag when it comes to training. Both of the parent breeds can be trained fairly easily and follow orders great. The same is usually true for this breed, though there have been cases where training seemed more difficult than it should. It’s definitely a breed that will require some patience. They have a lot of energy and a short attention span. Stick to short training sessions on a daily basis.

Family Friendly. Once again, this can go either way with this particular breed. Both of the parent breeds have the potential to be great with children, but it usually requires that they are raised around them. In particular, chihuahuas can be rather unfriendly to everyone they don’t know. This is a quality that the hybrid may inherit.

You can overcome this problem from an early age by encouraging constant socialization. Constantly introduce the puppy to other dogs and people. If the puppy grows up with children, then it is far more likely to have pleasant experiences with them. Otherwise, they could be on edge and defensive.

Exercise. Every dog needs a lot of exercises and this is especially true of this breed. They can live a happy life inside of an apartment, but they need to get outside every day for some routine exercise. A dog park can be a great place to get exercise and to encourage socialization with other people and animals.

Is It Right For You?

Raising this cheenese dog will certainly take some work and attention, but it can be a very fun and rewarding experience. The puppy will grow into a dog that is highly intelligent, fiercely loyal, and extremely adorable. It is a great choice if you live in an apartment and want a small dog to keep you company.

Cheagle: A Friendly, Loyal Crossbreed
Dameranian: A Clingy And Fun-Loving Breed
The Poochon: Affectionate And Sociable
Canoodling With A Corkie: Top Facts You Have To Know
Cavapoo: The Sweet and Playful Breed
Tweet
Pin
Share10
10 Shares