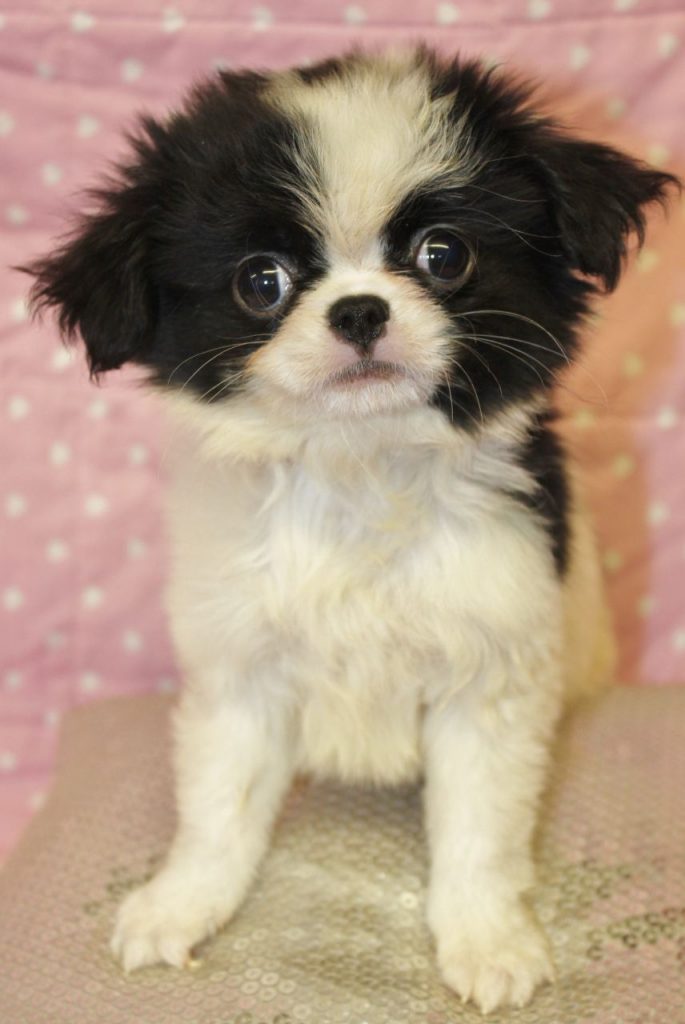 A cross between a Chihuahua and a Japanese Chin parents, the little Chin Wa can have the characteristics of either parent breed. It is a small toy breed that is very sociable and loves to be around people.

The coat can be straight, short or long, and often comes in white, brown, red, black cream, or grey colors. It doesn’t need a lot of grooming. The coat only needs be brushed once a week. Its ears can either be floppy or erect.

While it loves to play, it doesn’t require lots of exercise. However, it can have a stubborn streak in training.

The Chin Wa is among the newest designer dogs in town. It is the product of crossbreeding a Japanese Chin with a Chihuahua. Being a mixed breed, it isn’t part of any kennel club that caters to pure breeds.

Chihuahua – The Chihuahua got its name from the Mexican state with the same name where the dog was discovered sometime during the 1850s. There are two popular theories on the origin of the breed.

First, that it was the result of breeding local dogs with tiny hairless dogs that came from China, and brought to Mexico by Spanish traders. The second theory says that the Chihuahua descended from the South and Central American dog called Techichi that originates as far back as the 9th century.

The breed was taken to America during the latter part of the 19th century. It was registered with the American Kennel Club in 1904. The early Chihuahuas were bred with Pomeranians or Papillons, resulting to the long-haired Chihuahuas. Over the years, the breed consistently gained in popularity.

The Chihuahua is known for being a confident, brave, and daring dog. It is alert, and typically bonds closely with only one member of the family. It can be quite demanding and sensitive as it craves for attention and affection. The designer breed isn’t a natural with kids, in particular, the younger and smaller ones. This can be addressed with early socialization.

Japanese Chin – A very old dog breed, the Japanese Chin is believed to have begun in the Chinese court. It was a popular gift given to foreign visitors, including Japanese.

When the breed came to Japan, people didn’t think it was a breed of dog, but considered it as a separate animal. It was then crossbred with other small native dogs to become the Japanese Chin that people know today. It wasn’t until the middle of the 1800s that it was introduced to other nations like Britain and the US, where the breed has become popular.

Today, the Japanese Chin is known as an affectionate, intelligent, and happy dog that tends to be chatty. It is a good people-charmer, and is quite sensitive to its human’s emotions.

The Japanese Chin tends to develop the same characteristics of its owner. If the owner is reserved and quiet, the dog will likely grow up as a reserved and quiet dog. If it lives with an outgoing individual, the dog may likely be the same.

Early socialization is very important for a Japanese Chin. Otherwise, it can suffer from separation anxiety.

On average, the diminutive toy dog can weigh anywhere from 4 to 8 lbs., and measure up to 11” in height. Its ears can be erect or floppy, or it can fold at the tip similar to a Chihuahua’s. The head can likewise be like the Chihuahua parent’s apple-shaped head. It may also have a tail that curls.

The eyes tend to be round and large, and its nose is often similar to the Japanese Chin’s. The coat can be long (if inherited from the Chin) or short (if it takes after the Chihuahua). Either way, the mixed breed is considered to be an above average or moderate shedder. The coat may be in any of the following colors: white, brown, red, black cream, or grey.

Brushing the coat 2 or three times a week can help keep the fur tangle-free. It may need more frequent brushing if the coat is particularly long. As small dogs are known to be prone to dental issues, brushing your Chin Wa’s teeth at least twice a week is important.

On average, you can expect to enjoy the devotion, love, and companionship of your Chin Wa for around 10 to 12 years. It can live longer, if you give it a lot of tender loving care.

Although the Chin Wa is a smart dog that can learn easily, it may display a stubborn streak that can make training more difficult. Your rewards will be great once you are able to train your dog properly. It can adeptly perform tricks and would love to do them for you to please you.

The designer breed is known as a “people dog” as it always wants to be anywhere there is an activity. It enjoys being the center of attention. It can be the ideal family dog as it is playful, loving, loyal, and alert.

If your Chin Wa takes more after its Japanese Chin parent, it will probably get along fine with other dogs or pets. But, if it inherits more traits from the Chihuahua, it may have interaction problems that early socialization can fix.

When exposed early to children and other animals, the Chin Wa can fare well. However, it is still not recommended to leave your dog with small kids unsupervised as this may result to injuries to your tiny dog.

The Chin Wa is ideal for apartment living. As a small toy dog, it only needs a little space to move around and play. If you are living alone or with no small children, and you want an alert watchdog, you can consider adopting a Chin Wa.

As a moderately active small dog, your Chin Wa needs high quality food that is specifically intended for its size, age, and activity level. You should space its meals the entire day. Just be careful not to overfeed your pooch with human food and treats as the Chin Wa can be quite determined and fussy. It may even refuse to eat its kibble.

Because the Chin Wa is only moderately active, it doesn’t need lots of exercise to be happy and in good physical shape. Thus, it can adapt to living in an apartment with not-so-active masters.

Some indoor playtime can already address some of its physical needs. Toys can also provide mental stimulation. However, it will still need to go out daily to get its dose of leashed outdoor walks. You can allow your pooch to enjoy some playtime off the leash at the local dog park – provided it meets the park’s size requirements. It will also be a good opportunity for your Chin Wa to meet and socialize with other pets.

As mentioned, training your Chin Wa can be a bit tricky if it exhibits its stubborn side, although there is no question about its intelligence. You may notice your dog divided on whether to obey or ignore your command!

Under an experienced trainer, however, your dog can quickly learn, especially when positive reinforcement techniques are employed. These include giving rewards in the form of treats or praise whenever your dog obeys your command or gives the desired and expected results.

When training your Chin Wa, you must be patient, consistent, and firm. Early training and socialization are important, given your dog’s inherited traits.

Your Chin Wa doesn’t require a lot of grooming, particularly when it has a short coat. Brushing the coat twice to thrice a week may be enough. However, the coat may need daily brushing if it is long, and thus prone to tangling.

You can give your dog a bath each time you feel it needs one. Use dog shampoo each time. Avoid giving baths within short intervals. Otherwise, you risk drying its skin.

If you notice the nails growing long, and not naturally worn down, you can try to clip them. Otherwise, you can ask professional groomers to do the task for you.

Wipe the ears clean, and check them for infections once a week. You should also make sure to brush its teeth at least twice a week to avoid dental problems that small dogs are prone to.

As a mixed breed, the Chin Wa can inherit the common health problems that either of its parent breeds are predisposed to. These include hypoglycemia, patellar luxation, heart problems, Legg-Calve-Perthes, eye problems, open fontanel, collapsed trachea, shivering, and hydrocephalus.

A reputable breeder can produce the health clearances of both parent dogs to guarantee that your Chin Wa’s parents are both in good physical condition. It is thus a good idea to visit the puppy you intend to adopt to check on its current health condition, and also to see how the breeder maintains the living condition of the animals in its kennel. This will usually show how healthy the pup will turn out to be.

Where to Look for a Chin Wa

Welcoming a Chin Wa as a new member of your family entails lots of careful thought. It isn’t enough that you find the right puppy for your family. It is just as important to find the right breeder. You can use breeder referral directories online for this purpose to help you get in touch with reputable and experienced breeders in your area. You can also get suggestions from affiliated clubs with the help of their representatives.

If you first want to see several Chin Was together in a single place, you can attend events like dog shows featuring designer breeds. During the event, you can approach different breeders to know if they will be willing to provide the puppy you want.

You can also get the names of some of their previous clients. If you can, talk with these new owners of Chin Was. Ask about their experience with the Chin Wa breeder.

A reputable and experienced breeder raises their dogs and litter in a hygienic environment. They give their wards sufficient care, and all the exercise they need. The dogs also receive proper medical attention.

The ideal breeder is patient enough to thoroughly address every concern and question you may have. These may include breeding, training, competition, housekeeping, or health.

A Chin Wa is an excellent choice if you’re looking for a lap dog that is not difficult to look after, and doesn’t require a lot of walking. But, bear in mind that the mixed breed doesn’t naturally get along well with people and other pets, and will need early socialization to fix the problem.

Likewise, the dog doesn’t want to be left on its own – even for only a short period of time. If this isn’t an issue for you, then go ahead and adopt a Chin Wa. You won’t regret the decision as the pooch will prove to be a great companion for you and your family!

Back To Small Mixed Breeds

Pet Owner's Guide to the Chion
Top 17 Tips for Future Shorkie Owners
Havaton: Just Gotta Have One
You Can Call Me Chipoo Or Poochi…I’m Still Cute!
Check Out The Wauzer
Tweet
Pin8
Share102
110 Shares