With an average lifespan between 12 and 15 years, the small Chion dog is a great option for small living spaces and homes without an big backyard. They are affectionate, charming, and intelligent and make a playful companion for seniors, singles and families with children.

They are also known as the Chi-a-Pap, Pap-chi and Papihuahua. These various names are all derivative of the two highly intelligent dog breeds that combine to makes this lovable hybrid: the Papillion and the Chihuahua.

Both the Chihuahua and the Papillion are excellent companions and these traits are abundant in the Chion as well. They are the best companions a dog owner could hope for and make friends readily with other dogs and even the house cat. This makes the Chion a perfect family pet.

This pup is also a pretty good watch dog with a strong instinct to alert their owners to the presence of strange people, noises or even the occasional odd smell. It should be mentioned that this urge can reach excessive levels and this makes the Chion better suited to a small home environment rather than an apartment where the constant barking can annoy the neighbors.

Although they are lovable friends and terrific companions they can present some especially challenging training issues.

The History of the Chion

As mentioned the Chion is a designer or hybrid dog with the combined traits of two very intelligent and social breeds of dog. The first is the Chihuahua, this breed was discovered near some ancient ruins in Northern Mexico. The small dog breed was thought to have been created by an ancient civilization that was believed to have thrived between the 10th and 12th centuries.

On the other side of the Chion dog family are the Papillions. Papillions are a continental breed of Spaniel and is actually one of the oldest in the Spaniel family. The very earliest Papillions have a history that has been beautifully depicted in a wide range of artistic works. According to this detailed and we–documented evidence, experts agree that the earliest toy spaniels were found in Italy. The first depictions of the spaniel in works of art date to the early 1500’s.

Pedigree of the Chion

The Chion breed is a designed hybrid with the combined lineage of Papillion and Chihuahua. Because this is a first-generation combination, a they must be the direct descendant of purebred Papillon and Chihuahua parents. In other words, a set of Chions even if pure hybrid can’t have a litter of Chion puppies.

These standards for  breeding have been set by the ACHC, or the American Canine Hybrid Club. This is the regulatory board that oversees and recognizes the breeding of dogs. Standards also stipulate that a true Chion must be the offspring of parents with pure-blood pedigree papers registered with the American Kennel Club.

The AKC’s description of the first Chihuahua dates back to 1904 when the dog was called “sassy, graceful and charming”. The Papillion was later entered into the AKC’s registry of dog breeds in 1915 and described as “upbeat, friendly and happy”. These were the very descriptions that were considered when creating the Chion dog, a breed that possesses all the aforementioned traits in surprising and popular ratios.

The Chihuahua and the Papillion have both been accustomed to a diet high in poultry and it is logical to assume that the Chion will be happy on the same. Pups need to be fed three to four meals a day because smaller portions more frequently are easier to digest than one big meal.

Because off the propensity these smaller breeds can have for dental complications, good quality dry food and dog treats should be the staple of his diet from this young age forward. It may even be necessary to incorporate a tooth brushing routine into your dog’s regular grooming.

Chion dogs are a playful and energetic breed and these very traits can make the dog somewhat difficult to train. While these dogs possess an acute intellect, they also have a delight for being noisy and can fight hard against the most patient and consistent training efforts.

Furthermore, the pup is aware of his small size and will compensate for this with a quick snap of the teeth if they feel threatened. Early socialization is important to keep this tendency to biting in check.

Nevertheless, the Chion still has a much larger side of their personality that truly wants a good relationship with their human counterparts. With a patient hand and consistent efforts, this breed will respond well. If you measure out your training efforts with plentiful praise and rewards for desired behaviors,  Chion dogs will be eager and enthusiastic to comply.

The size of any hybrid breed is always dependent on the characteristic of the predominant parent. In the case of the Chion, both of the parent breeds are fairly small. The typical size and weight  is 10 pounds and 11 inches at the shoulder.

The little fur baby is a spunky sassy little dog that will be lively, alert and always in the mood for a game. They are closely attached to their owners and can become jealous and possessive in the presence of unfamiliar people or situations. Their small size makes them an excellent lap dog and they will enjoy their owner’s company for long hours.

Probably a trait inherited from their Chihuahua ancestry, they can be demanding, short tempered and easily irritated. The best type of owner for this special hybrid breed is one that can shower lavish attention on them and keep them thoroughly engaged and entertained.

This mixed breed dog is a generally robust and healthy breed of dog. Nevertheless, being hybrid, they can tend to inherit the health concerns from both sides of their families.

Chihuahuas are known for developing patellar luxation, a sever joint condition. Their small skulls also make them highly susceptible to dental issues and overcrowded teeth. Additionally, the Chion can be vulnerable to eye injuries or the effects of hypoglycemia. Their small size means they can burn off high amounts of energy and find it hard to consume an equal amount. This will make frequent meals of smaller sizes a good idea.

The Papillion is known for their larger floppy ears; these are also present in the Chion and careful attention and cleaning of the ears will avoid the occurrence of infection.

Like most breeds of dog the they need to be exercised regularly. Daily sessions of exercise and play time not only strengthen the bond between dog and owner, making the occurrences of misbehavior fewer and further between.

Exercise with other dogs also helps to keep the Chion sociable and friendly. Being small dogs, exercise times can be shorter than they would be other dog breeds. Even a walk around the block or a 10 – 15-minute walk through the park will suffice.

The Chion dog has been classified as an average shedder. Their coat is slightly longer than you will find in a Chihuahua. Their coats are generally longer, thin, and feature curled fringes at the ends. Much like both parent breeds, they will can be solid colored, but there are many with spots and marks.

Regular brushing is important for keeping their fur soft and mat free. While their coat may only need brushing a couple times in a week, the ears will need extra attention to keep them soft and free from matted lumps.

If after reading the info above, you decide to own one of these little dogs, I believe you will have loyal and loving companion that will bring you many years of enjoyment. 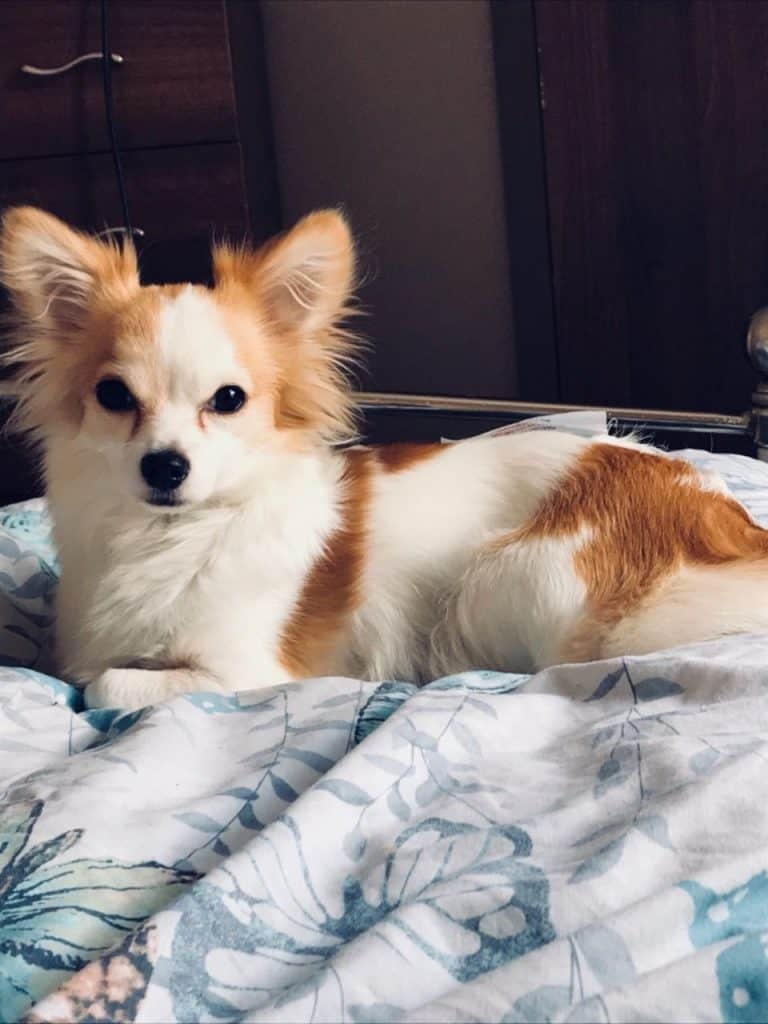 Chug: A Spunky, Sweet Crossbreed
Top 17 Tips for Future Shorkie Owners
Will The Lhasapoo Be The One For You?
Pekachi: The Affectionate And Devoted Companion Dog
Top 10 Reasons to Love a Shorkie Poo
Tweet
Pin8
Share12
20 Shares