They say a dog is man’s best companion, but not all dogs are home-friendly, especially for apartment tenants. Enter the Chipoo, a mixed (designer) breed of the Chihuahua and the Poodle, hence, the name “Chipoo.” It is a small and lightweight dog ideal for any home setting because it sheds less unlike most dogs. Depending on the tender, loving care owners are willing to provide, this fun and intelligent dog can live for up to 12 to 15 years.

Fun, intelligent, and attention-seeking, the Chipoo is a dog that can be easily house trained. It also serves as some sort of watchdog because of its natural propensity to be wary of strangers, especially those with suspicious behavior.

You can read further to determine if the Chipoo is the right kind of dog for you.

Again, the parents of the Chipoo are the Chihuahua and the Poodle, in particular, the miniature Poodle. Both dogs are already relatively small in size, so it’s no mystery that the Chipoo will take after its parents’ diminutive stature.

Despite its small size (weighing 3 to 6 pounds), the Chihuahua has an enormous personality! Its speed and agile frame make it a very viable competitor in dog sports. Moreover, it is among the top 10 watchdogs approved by experts.

It’s a suitable dog for first-time owners as well as apartment owners due to its all-around friendliness, trainability, adaptability, and ease when it comes to grooming, although they’re not usually the best dog to have around very young children.

The Poodle is an old breed that descends from ancient and various lines of hunting dogs. Its origin dates far back to the time of ancient Egyptians and Romans. Elegant and clever as they are, these dogs usually bag first place in dog shows.

Poodles are sweet and affectionate towards people and are incredibly child friendly. They are intelligent and easy to train, but require daily exercise.

With a weight of 3 to 20 pounds and a height of 5 to 15 inches, the Chipoo may look more like a Chihuahua than a miniature poodle, although that may vary from time to time. This tiny dog has a small head with a black nose, and long, wavy, or curly hair much like the Poodle’s, but the shape and appearance of the ears take after the Chihuahua’s. 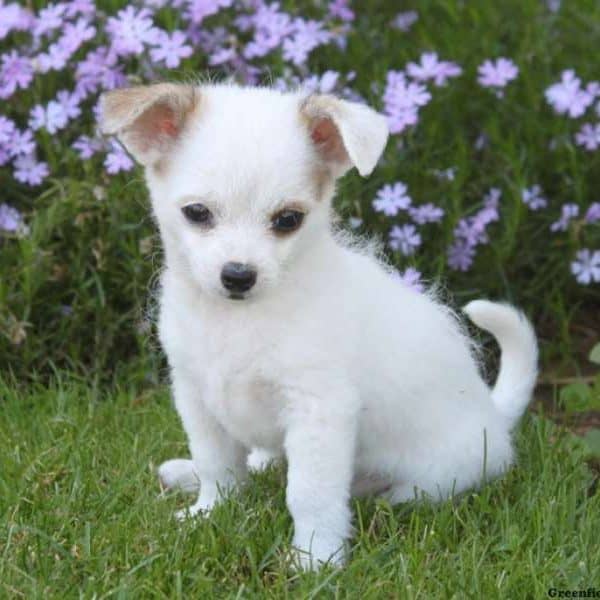 In some cases, the Chipoo may have a combination of coats, giving it a smooth, fluffy, coarse texture. The colors can vary from white, black, brown, gray, or cream. Being part-poodle, the Chipoo sheds less hair, making it suitable for those with allergies.

The Chipoo has a life expectancy of 12 to 15 years, depending on how well it’s taken care of. This lifespan is just about the average for small breed dogs.

Being playful and affectionate makes them an ideal family pet. They have the tendency to look for attention and please others by cuddling up to their owners. Because they are also extremely loyal to their owners, the Chipoo also has a terrier-like temperament when it comes to strangers, primarily, they bark at any suspicious strangers.

But because of their small size, Chipoos are not ideal watchdogs. And despite being an ideal family pet, it is highly recommended that you keep them away from small children. Again, due to their small size, a toddler may easily harm them by playing with them too intensely or rashly.

Again speaking of their loyalty, they can be extremely attached to a single person in the household over other members of the same house. But rest assured that they can mingle well with other pets and dogs.

The Chipoo also boasts of an independent nature, so expect the little thing to be bossy to a fault—they would act around as if they own your home, unless you show them who’s in charge. This dog doesn’t need to be kept in cool temperatures like a Siberian husky, but it is important that the Chipoo be kept in a warm, dry place. During the cold season, it is best that they are wrapped in a sweater or a coat when going outside in temperatures below 50 degrees Fahrenheit.  Although the Chipoo sheds sparsely, it is still important to keep the house well-kempt and clean so as to avoid loose hair strands from getting tangled with any objects or dirt.

And because of its miniature size, the Chipoo can also find a comfortable home in an apartment or condominium. But it’s not advisable to be away from home for long stretches as Chipoos are prone to experience separation anxiety. Make sure to allot some space for them to play.

Also, keep your home safe by keeping them away from any sharp objects and pointed things like knifes and needles because they’re pretty energetic and naturally curious.

Don’t forget to devote some time for your pet. Play with them by teaching them tricks and show some affection by cuddling them on your lap.

The Chipoo is a picky eater. Give them the diet appropriate for small dogs—just ¾ to 1.5 cups per meal are enough to keep them satisfied. They prefer wet food over dry food because most of them find it difficult to digest some ingredients found in dry food, especially the generic ones. It is advised to give them high quality wet food, and feed them many times in a day to reduce the risk of having hyperglycemia.

The Chipoo doesn’t require much exercise to keep them in shape, given that they have a diminutive size. Although they are quick little dogs that like to run around, owning a backyard is not necessary and taking them outdoors can be done occasionally. Because of that, they are very ideal as indoor pets. Even so, an occasional walk in the park never hurts. Just don’t take them out when the outdoor temperatures are extremely cold.

Take note that Chipoos can get bored quite easily. So instead of just taking them out for the occasional walk in the park, keep some toys around the house to keep them preoccupied for hours on end. They like to be challenged, so schedule some play time with them and keep them mentally stimulated. If not, they will go around seeking for fun, mischief, and attention by howling and chewing.

The Chipoos are intelligent and are easy to train due to their poodle ancestry. Getting them house trained or developing the habit of responding to orders entails a lot of positive encouragement and praises at a very young age. Giving them harsh treatment will not be effective because they tend to be sensitive. Chipoos will remember the deed, and may even turn out to be more stubborn in any future training sessions.

Get them to socialize. Chipoos can become very territorial and possessive. They get their stubborn nature from their Chihuahua ancestry, so monitor and coach them regularly. Train them to get over their habit of getting overly attached.

Chipoos require grooming on a daily or weekly basis, depending on the type of coat they have. To remove tear stains, clean the area around their eyes daily. Brush their coat using a comb with fine bristles at least once a day. Their ears need to be wiped cleaned weekly. Clip their nails as needed.

Give them a bath once or twice a month, or as needed. Brush their coat first before getting them bathed to get rid of loose hair first.  Keep them clean in between baths using dog wipes every few days. Because they aren’t heavy shedders, cleaning up after them won’t be as difficult. But, if the Chipoo hair ever grows as long as a poodle’s, be sure to take them to a groomer every so often for a trim.

Owning a hybrid dog comes with the possibility of having problems regarding health issues associated with the Chihuahua and Poodle. But because it is a mixed breed, generally, it will have fewer health issues than purebreds.

The Chipoo is typically a healthy dog, although they can inherit some conditions like over-productive tear glands, snoring and wheezing, hypoglycemia (low blood sugar), loose knee caps, glaucoma (an eye disease that can predispose one to blindness), and dry skin which can make it a challenge to respond well to topical medications for flea and ticks.

Common among all small breed dogs are dental issues, so regular brushing (2 to 3 times a week) is a must. Remember to provide them proper nutrition and attend to their exercise needs from time to time. Have a veterinarian advise you on what special food you can give to this small dog with digestive problems. Get them vaccinated as well and have them treated with flea medications, if needed.

To spare you from owning a Chipoo with health concerns, find a reputable breeder that can assure quality that’s worth your money.

Where Can You Get a Chipoo?

Chipoos are not difficult to find because Chipoo litters usually comprise of 4 to 5 puppies. To produce a Chipoo, breeders will allow a first generation cross by allowing a purebred poodle to mate with a purebred Chihuahua, but sometimes, a backcross (chipoos crossing with poodles or Chihuahuas) or multi-generation cross (other chipoos) is done. Different forms of crosses will, therefore, lead to different Chipoos with varying characteristics.

Finding them won’t be difficult because Chipoos are the trend in owning dogs today. You can look for breeders online but make sure to find the reputable ones.

If you are looking for a dog with minimal shedding, suitable for allergy sufferers, small enough to be kept in apartments or condominiums, does not bark excessively and doesn’t need to be taken outside regularly, then the Chipoo may be the right dog for you. It’s a dog of sociable breed, sweet, and cuddly. Loyal and perceptive, they only bark when necessary to warn their owners of strangers.

Cava-tzu: The tzu-per cute, smart and playful little dog for the whole family
Lachon: Your Next Fluffy Cuddle Buddy
Pooton: A Fun-Loving Pup
Peekapoo – The Aristocratic Designer Dog
Is A Yorkie Poo The One For You?
Tweet
Pin12
Share64
76 Shares