A Dameranian is a crossbreed between a Dachshund and a Pomeranian. The Dachshund is often referred to as the weenie or sausage dog. Because of this, the Dameranian would sometimes be called a Pomaweenie or Pomweenie.

The distinct physical features of the Dameranian is a reason why it’s becoming a popular pet for many families.

There’s no clear evidence of the first Dameranian. But, it’s obviously because of an accidental mating between a Pomeranian and a Dachshund. It’s only been a few years since these adorable dogs have popped up in houses and on the Internet.

If you couldn’t choose between a Pomeranian and a Dachshund, then getting a Dameranian may be a wise choice. You could be getting the best or the worst of both breeds. Let’s learn more about the Dameranian.

Dachshund – Dachshunds were originally bred in Germany as hound dogs for hunting. They would hunt tunneling animals such as rabbits, badgers, and foxes. That’s why they were also called “badger dogs”. When hunting wild boars, they often went in packs.

The origin of this breed can go far back in the 15th century. But, Germany developed the breed in the 17th century.

Because of the Dachshund’s loving and energetic personality, it has become a popular house pet and show dog.

One downside of Dachshunds is their love of digging. They were originally bred to dig up tunneling animals so it’s no surprise that digging would be in their blood.

Pomeranian – Pomeranians may have come from Iceland, but the breed we know today has been developed in Germany. They were first bred in Pomerania, a small historical region south of the Baltic Sea. This is where the breed’s name came from.

Royal owners like Queen Victoria popularized Pomeranians. During this time, the breed’s size decreased significantly. Before, they were twice the size of the Pomeranians we know today.

Because of the change in their size, they’ve become the adorable house pets that people have grown to love. 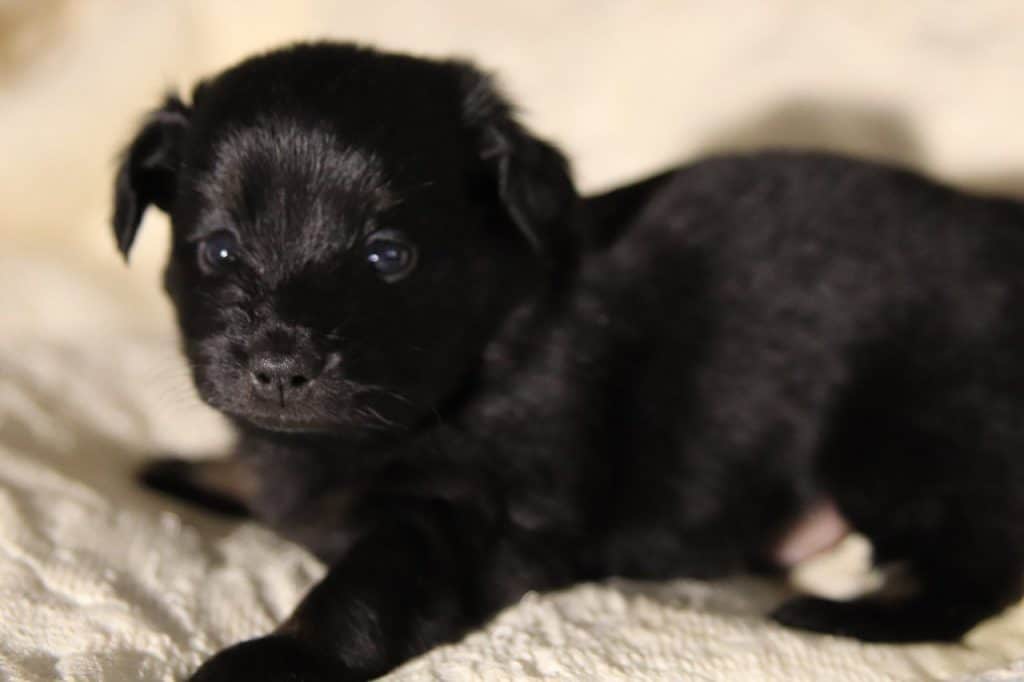 The Dameranian comes from two small dog breeds, so you can expect that they’d be small as well. Their weight may range from 8 lbs. up to 25 lbs. and their height could range from 5 to 11 inches.

Dameranian coats may differ for each dog. Most Dameranians would have thick and long coats like a Pomeranian’s. Sometimes, they would be short and wiry like a Dachshund’s. The coat would depend on the parents of the dog.

The coat colors may also vary. They could be black, grey, white, blue, tan, or brown. Most Dameranians would have a thicker coat surrounding the neck just like the famous lion-like mane of Pomeranians.

They have apple-shaped heads and short legs. As for their ears, they could have droopy or erect ears.

However, they tend to inherit the long and slender bodies, as well as the overall facial features of Dachshunds.

The average life span of a Dameranian can last for 12-16 years. It could be longer since the oldest Pomeranian in history lived more than 29 years. The oldest Dachshund recorded was a 25-year-old dog.

However, they may also have a shorter lifespan if not given enough attention. That’s why it’s important to give them enough love, affection, and medical attention when needed.

You can expect a Dameranian to be intelligent, loving, active, courageous, and loyal. They would also show more affection and bond towards a single owner even when living with many people.

Because of this, Dameranians have higher chances to experience separation anxiety when they’re left alone.

Dameranians will want your attention, so you can expect them to be obedient and quick-learners. They love eating that’s why food can motivate them easily. They even memorize they’re feeding schedules.

They may bark occasionally and can easily be amused with toys. If you don’t like noisy barking in the middle of the night, Dameranians may be the pet for you.

You may find Dameranians love to dig a lot since they have Dachshund genes. This could be a problem for owners who are taking care of a garden. Though difficult, this problem could be solved with proper training. 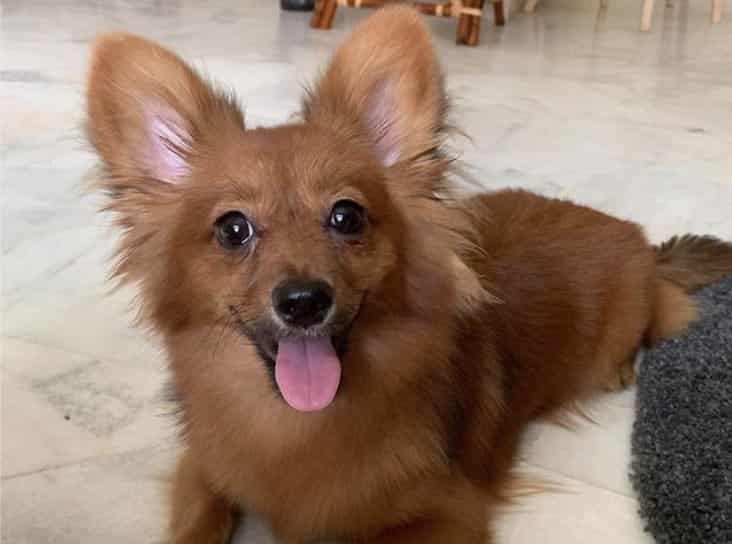 Make sure to keep a controlled environment with an ideal temperature for Dameranians. It’s because they don’t do well in extreme temperatures.

As for their living conditions, they would be able to live a healthy life as long as everything’s clean and safe around them. Don’t leave them outside for too long since their bodies can overheat or freeze easily.

They may need a lot of toys to keep them entertained. Stuffed toys and chew toys may be great for Dameranians.

They also do well around kids and elderly people since they are often sweet and affectionate. As long as they are treated well, they would be ideal companions for small children.

Like all small dog breeds, Dameranians would have a healthy life when given high-quality dog food made for small dogs.

If you have extra time on your hands, you can whip up from homemade dog food and treats.

However, it’s important to control the servings per feeding. Dachshunds can get overweight easily and it’s no surprise if the Dameranian would inherit this trait.

A veterinarian would be able to determine the ideal diet plan for a Dameranian, which will prevent obesity.

Try looking up some healthy homemade dog food for Dameranians that will prevent them from becoming overweight. Usually, dog food with meat for protein and rice as the main grain may help manage weight.

When giving treats, make sure that it’s only 5% of their total diet. Too much treats (may also include table scraps) would induce obesity in Dameranians.

Even when they ask for more food, try not to give them more if they’ve already eaten too much. It could be hard to endure this if they start looking at you with those cute puppy eyes. But, it has to be done.

As you’ve read above, Dameranian dogs can have the tendency to become overweight. That’s why exercise is important for them.

They’re small dogs, so simple playtime in the backyard and in the house would be enough exercise for them.

Still, they will need to get walks and playtime outdoors. Taking them to dog parks is one way to keep their bodies and social life healthy.

Make sure to keep the activities to a maximum of around 1 hour daily. They may become too tired if they would play for long hours.

Looking at the Dachshund and Pomeranian, these two breeds are among the best dogs to train. Dachshunds are trained as hunters while Pomeranians as show dogs.

Because of these origin breeds, the Dameranian breed would likely be a great dog to train.

The best person to train Dameranians would be their owners. Since we’ve already established how clingy they could be, they will try to please their owners in anyway they can. This would include learning tricks and following commands.

Still, you can ask professional dog trainers for help. They will be able to teach you ways on how to potty train and train your Dameranian properly. Professional trainers would also be a good choice for owners who have Dameranians with behavior issues.

They’re also easily swooned by a good treat. Using their favorite treats as a reward during training will make everything so much easier. 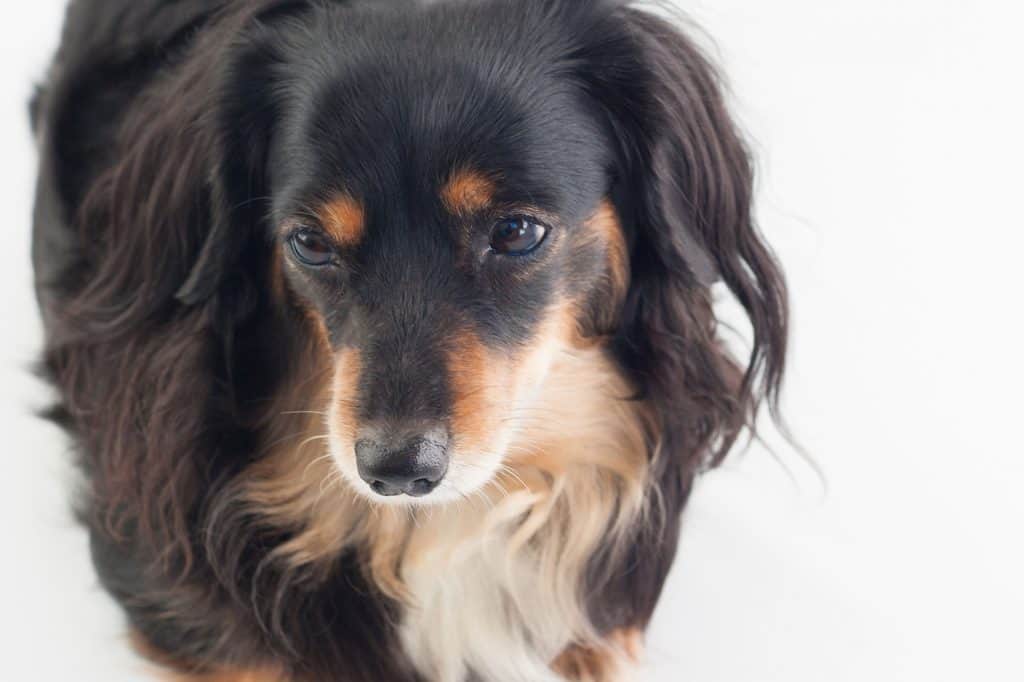 Both Dachshunds and Pomeranians are moderate shedders, which leaves the Dameranian dog to be the same. Still, they need regular grooming.

Dameranians, especially ones with long coats, would need brushing about 4-5 times weekly. Only give them baths when needed using dog shampoo.

Their nails would also need clipping when they begin to grow long, and their ears need cleaning at least once a week to avoid infections. It would also be advisable to brush their teeth at least twice a week.

If you’re not comfortable grooming Dameranians, you can always bring them to professional groomers. They’ll be able to give the right kind of services that will not stress the dogs too much.

Mixed breed dogs usually have fewer health issues. Still, there’s a chance that they could inherit health problems from one of the parents.

Pomeranians have common health problems like tracheal collapse, which will give them a difficult time breathing. In rare cases, they could get a kind of alopecia where the affected skin area would blacken.

For Dachshunds, IVDD or intervertebral disc disease is a common problem. It’s similar to slipped discs in people. IVDD is common in overweight Dachshunds. Older Pomeranians and Dachshunds may also get heart diseases.

To avoid complications and life-threatening situations, it’s important to take Dameranians to a vet regularly. Veterinarians would be able to pinpoint the type of health issue a Dameranian would have. He/She can also give treatments before the condition becomes worse.

Where To Look For Dameranians

It could be difficult finding a Dameranian puppy since most pet shops would only sell purebred dogs. The best way to acquire one would be through a personal friend, family or acquaintance with a Dachshund and Pomeranian.

Some people breed Dameranians and may sell them online. But, you must stay away from “puppy mills” or establishments and people related to them. Usually, pups from these sources are in poor condition, and may have a lot of health issues. If you buy from a breeder make absolutely sure that they are reputable!

You can always get a Dachshund and Pomeranian of your own and breed your own Dameranians. This will give you the choice of how your puppies may look like.

Dameranians, like other designer dog breeds, have their own unique and wonderful qualities. They’re smart, lovable, and adorable – being a small dog breed.

And like all dogs, they need love and affection from their owners. They may be clingier compared to other breeds, so be ready to give more of your time and attention to these little cuties.

Before getting your own Dameranian, make sure that you’re ready for the responsibility ahead. Join online communities with Dameranian owners to know more about the breed.

And finally, don’t forget to just enjoy being a furparent of loving little Dameranians.

What The Heck Is A Mauzer?
Everything You Need To Know About The Malshi
Chizer: An Energetic And Bubbly Breed
All About The Daisy Dog Breed
Pomapoo: Tiny Clever Snugglers
Tweet
Pin11
Share67
78 Shares