A Jackapoo is a fun-loving, energetic, and intelligent designer breed that is the product of crossbreeding a Jack Russell Terrier with a Poodle. Being a hybrid, the Jackapoo doesn’t have a long history yet.

The breed is only 2 to 3 decades old. Although the exact date of its origin cannot be pinpointed for certain, it is believed that it first appeared in the US sometime in the 1980s or 90s. The adorable designer breed is also known as Poojack, Jack-a-Poo, or Jackadoodle.

Because of its relatively recent appearance and short history, the breed has been recognized only by a handful of canine clubs. The Jackapoo will hopefully gain more recognition from more dog organizations in the future.

When the breed came to Australia, it was refined further as a working breed. These days, the Jack Russell Terrier is popular as a companion dog, while still being widely used for hunting.

From a full-sized canine, the Standard Poodle was bred to produce the Miniature Poodle. This began the trend of Poodles serving more as companion dogs.

An even smaller version of the Poodle, the Toy Poodle, was bred during the early 20th Century in America. At this time, breeders were keen on developing companion dogs, which slowly erased the Poodle’s hunting history.

Thus, there are 3 versions of the Poodle today: Standard, Miniature, and Toy. The mix-breed Jackapoo is usually bred from the Toy or Miniature Poodle.

It is worth-mentioning that male and female Jackapoos typically vary in terms of size. One other trait that people love about Jackadoodles is their coat color variations. The designer breed’s coat can appear in any of these colors: black, black marks, white with tan, brown, brown and white, chocolate, gray, blue, and golden.

A Jackapoo dog typically has a flat head with a distinct wide area around the ears. The ears are front-oriented and of medium length. The muzzle is also of medium length and is relatively wide.

The tail is often curled, although it is docked in some Jackapoos because of their human owners’ preferences. The coat hair may be coarse like its parent Jack Russell Terrier parent’s or furry due to its Poodle or Miniature Poodle genes.

One other characteristic of the hybrid’s coat is its being hypoallergenic. This is inherited from the Poodle. If you are allergic to some specific breeds, then this little furry ball of energy will be gentle to your nose.

The Jackapoo can either be a substantial or minimal shedder. This will depend on the coat type that it inherited from its parent breeds. If the Poodle has a stronger influence, then there may only be minimal coat shedding. However, if it is the Jack Russell Terrier’ coat that the hybrid inherited, then shedding may be significant.

On average, the lifespan of a Jackapoo is 10 years, but it can live up to 12 to 15 years, depending on its health condition, environment, and the care it enjoys from its owner.

You can say that a Jackapoo’s temperament is a combination of the traits of its two parent breeds. How well the designer breed is raised is also a major factor.

In general, a Jackapoo puppy inherits its poodle parent’s intelligence and pride. From the Jack Russell terrier, it usually inherits its hardworking and active nature.

Thus, you can expect your Jackapoo puppy to grow up to be an intelligent, hardworking, and energetic dog. This isn’t always the case, however as some Jackapoos may inherit the dominant traits of one parent breed instead of the other.

A Jackapoo is usually not an aggressive dog, as long as it is socialized and trained from puppyhood. Its Jack Russell Terrier is known to be a bit aggressive or stubborn towards other animals. This is why socialization at a young age is very important for a Jackapoo.

The designer breed typically gets along well with kids – again, as long as it is socialized well. Both the parent breeds make great family pets. So, if you are looking for one, then the Jackapoo dog may be a great choice for you, especially if you have children.

The Jackapoo, inheriting the genes of the Jack Russell Terrier, potentially has very strong hunting instincts. Thus, it is not ideal to have one around if other small pets are present in your household.

In general, Jackapoos are great with children and other dogs. But, just like any other dog, you should never leave them alone with a small child.

Jackapoos are small to medium-sized dogs. Thus, they should be nourished with high quality kibbles that reflect their size and level of activity. Their meals should be distributed in two or three feedings. Refrain from including fillers in their meals like grains or carbs that may cause them to feel full or overeat.

Because of its Poodle DNA, your Jackapoo may be predisposed to a couple of digestive disorders: hemorrhagic gastroenteritis and pancreatitis when the dog reaches middle age. Treats and meals that are high in fat are definitely a big no-no.

The Jack Russell Terrier – Poodle combination results in a high energy, active, and intelligent mixed breed that always craves for something to do. The love to play outdoors, and need frequent exercise.

Just like their Jack Russell Terrier parent, Jackapoos aren’t lap dogs. They need a lot of physical activity and exercise, as well as mental stimulation every single day.

Beware of the Jackapoo’s tendency to become destructive if it doesn’t get the right amount of exercise. Thus, you need to keep that in mind when deciding on whether or not to get a Jackapoo. It can likewise turn out to be a big barker if it is not trained on proper behavior.

A Jackapoo’s trainability depends on the dominant traits it inherits from its parents. While the Poodle is known for its trainability and obedience, the Jack Russell can be quite a handful in training because of its stubbornness.

Both the Jack Russell Terrier and Poodle are blessed with superior intelligence. So, you can expect the Jackapoo to easily absorb lessons in their training sessions, although as mentioned, it can have a prideful, stubborn streak, which may complicate training sessions a bit. 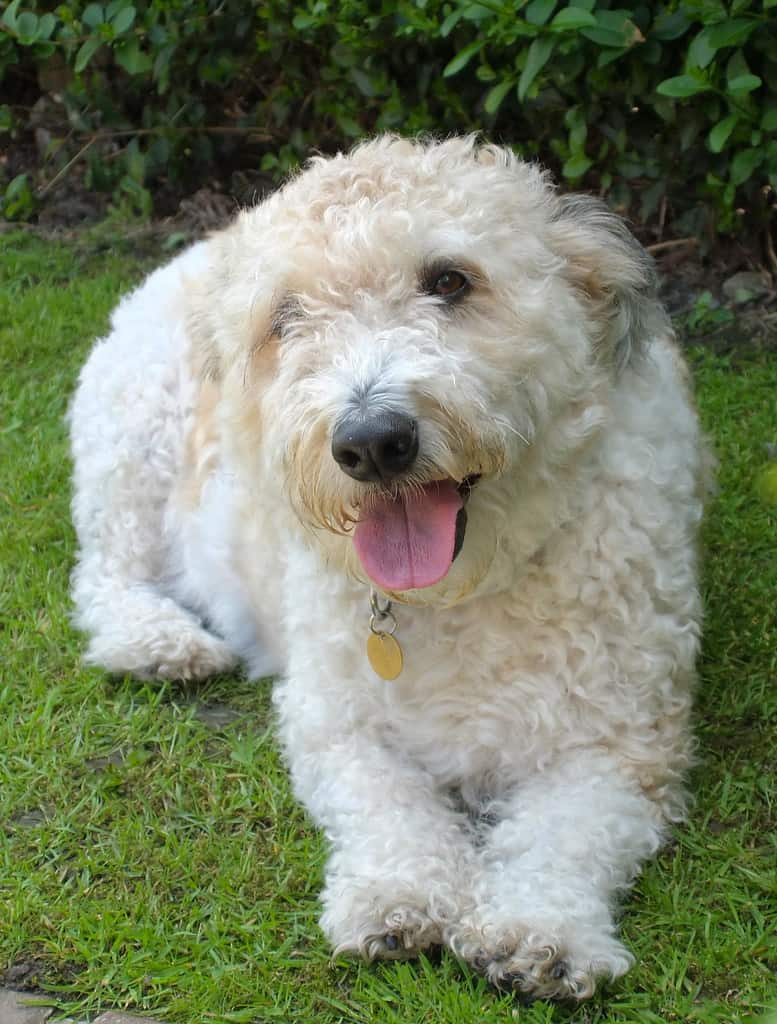 Patience is an important virtue to have when training a Jackapoo. But, in the end, once the Jackapoo gets a hang of things, it can be taught practically anything you want it to learn.

Socialization is crucial to any dog, and this particularly holds true for the Jackapoo. If not exposed early to children, dogs, other animals, and strangers, the Jackapoo may exhibit some stubborn or aggressive streaks.

Training sessions should be done frequently with lots of positive reinforcement. You can get the services of a professional trainer, if necessary, although you can train most Jackapoos at home.

Frequent barking may happen due to the Jackapoo’s Jack Russell Terrier genes. However, this can easily be addressed through proper training. It is nevertheless worth mentioning.

It is also important to bear in mind that the Jackapoo is quite a high energy dog! It will need lots of exercise on a daily basis. Aside from walks, it must get its daily dose of playtime to keep it happy and engaged, and away from destructive behavior.

A Jackapoo’s coat may either be straight and smooth, or curly and rough. It all depends on its inherited characteristics. This will dictate how you groom.

If the coat is on the rough side, it is a good idea to use a de-shedding tool. This will significantly reduce the shedding by getting rid of dead, loose undercoat, while avoiding damage to the top coat. It also helps bring out your dog’s natural oils, in turn, promoting a shiny top coat and healthier skin.

Use the de-shedding tool to keep your Jackapoo’s coat in good shape, particularly after a rough playtime or walk. Just make sure to get the right size appropriate for your pet’s size.

You can bathe your dog ideally every other week or as necessary. The teeth should be brushed and the ears cleaned every week. Nail clipping should also be done as necessary.

The Jackapoo, in general, is a healthy hybrid. It isn’t prone to a lot of hereditary health issues.

But, just like any other breed, it is more prone to some specific health problems than others. Fortunately, most of these ailments are minor and not life-threatening. These include allergies, dry skin, and ear infections, which are all easily treatable.

Hereditary health concerns may happen in some rare cases. These may include patellar luxation, deafness, cataracts, arthritis, and thyroid disease, among others.

There are health concerns that can be avoided when advance testing is done. Thus, it is important to get your Jackapoo only from a reputable breeder as this type of breeder always does health tests on their puppies to help lower the risk of health issues. Good hygiene practices can also keep the dog healthy.

Where to Look for a Jackapoo

As mentioned, you should only get a Jackapoo puppy from reputable breeders in the area. A prior research on good breeders may help. Ask for the results of health tests.

Avoid dealing with pet shops and puppy mills. It is best to stick with reputable breeders. You may also adopt a puppy from a shelter.

A Jackapoo would be a great addition to your family, especially if you have kids. It is highly intelligent, energetic, and active. Thus, you need to provide it with all the physical activities and exercise it needs. In return, it will love you and stay loyal to you and your family.

Back To Cute Little Mixed Breeds

The Spirited, Lively and Ever-Curious Yorkie Pin
Say Hey To The Adorable Malchi
Poochin: The Happy, Playful, and Quiet Breed
You Can Call Me Chipoo Or Poochi…I’m Still Cute!
Will The Lhasapoo Be The One For You?
Tweet
Pin7
Share42
49 Shares