Are you doing research about your next cuddle buddy in the house? Well you’re in luck because this article is going to give you insight into the adorable Lachon breed . Aside from its well-rounded toy-like face, you can’t help but marvel at this new cuddle buddy.

The Lachon dog is a designer or a hybrid dog that’s getting more attention with future dog owners and dog breeders. Breeders also call this mix La-Chon or Lhasa-Chon. You may mistake this breed to be a simple toy pet. This dog may look small. Designers mixed this breed for its natural sporting abilities and intellect from its parents. See, breeders designed Lachon for companionship.

The Lachon comes from the family of pure breeds of Bichon Frise and Lhasa Apso. The Bichon Frise is that breed with the mini-poodle-like face, mostly white, but with a healthy and sturdy small build. Its other parent, Lhasa Apso, is also a small breed with  long, straight, human-like hair that can extend down to the floor.

So how does it turn out as a pup? You’ll have one that’s bubbly with a round-face, long and wavy fur, and almond-shaped eyes. You’ll love it for being cuddly, a show-off, and playful, but protective companion. He can get a bit stubborn and hard to train. You can always mold its behavior when trained early. He can please you with a lot of tricks. He resembles the Bichon more, but carries the Lhasa’s regal protective traits, wit, and independence.

It’s best to know your Lachon’s parents to guide you as an owner. One day, their traits may show as your Lachon grows.

Lachon parents have an interesting heritage. For one, Bichons were great companions to the sailors, and Lhasa Apsos to the Tibetan monks.

Lhasa Apso is an independent dog that can try to dominate you if you don’t start acting early as a pack leader. It’s not friendly to strangers, and would definitely bark at them.

These guard dogs once served as burglar alarms for Buddhist monasteries in the Mountains of Tibet. With their keen eyesight and hearing, they naturally bark on threats.

They can execute their judgment and decide for themselves without any of your help. Unlike other dogs, they choose to please themselves and most of the time instead pleasing their owner. 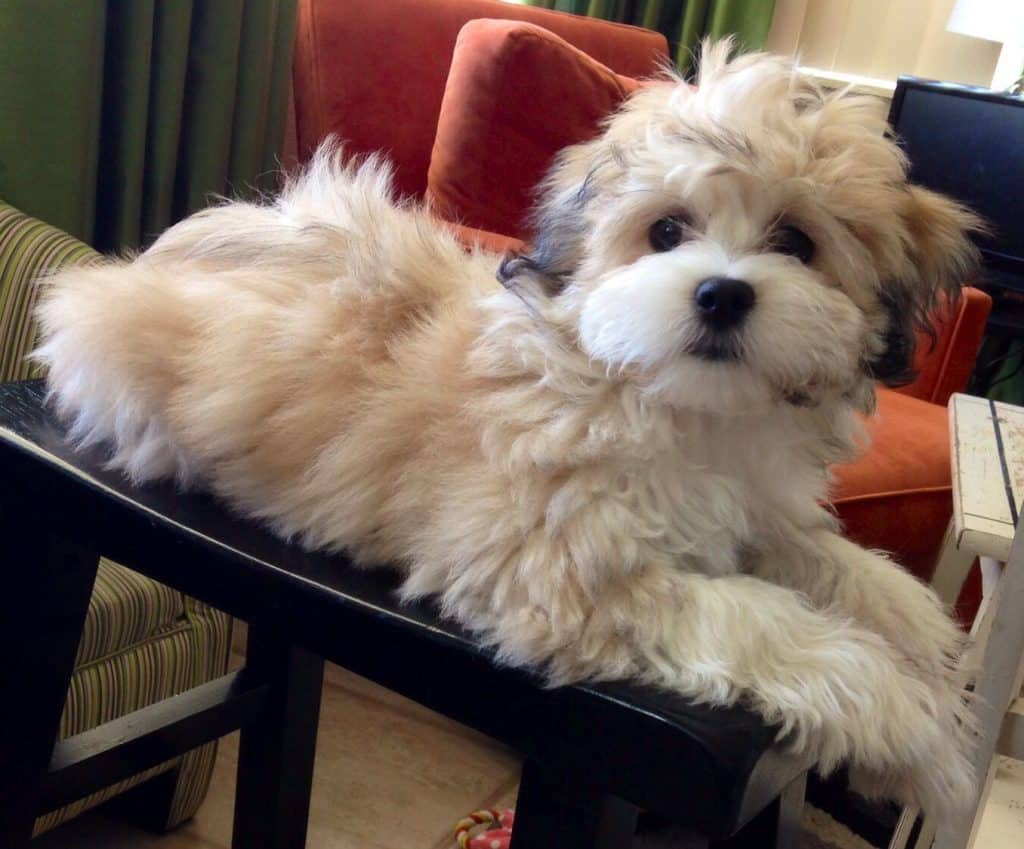 Because of their intelligence, the Tibetans consider them sacred. They believe that the souls of dead lamas (teachers) could enter the body of a Lhasa Apso. For this reason, no one else could own this breed (in the past) unless a lama or a monk gives him as a gift.

Lhasa Apso doesn’t only walk in a dignified manner, but they look dignified as well. You may envy its fur’s fullness because they are long and straight as human hair. It has a pair of dark brown eyes with a black muzzle that can go with or without a beard.

Doing things their way doesn’t mean that this breed cannot be loyal. They show loyalty to their owners by protecting them. You’ll know when they’re up to something when they don’t move on your instructions or walk away. They are responsive to discipline and exercises, but can be hard to house train. You know where it came from when your Lachon starts doing some things his way.

Known for being a non-sporting dog breed, Bichon Frise is a cheerful parent with plenty of tricks to show-off, but have a hard time dealing with separation anxiety.

The Bichons became favorites to Italian noblemen. They’d groom Bichons with lion-cut fur around their head.  With non-pointing muzzles, they have a black nose and dark round eyes. They can have shades of cream or apricot around their ears. They even got more popular when introduced to French nobility whou brought them as lap dogs or court companions.

Sadly, the Bichons became common dogs in the streets during the 19th century. They became companions to blind street performers and circus performers.

The breed has existed for a long time and people believed they descended from Maltese, Water Spaniel, Poodle, or Barbet.

Nevertheless, the Bichon Frise is a natural charmer, cheerful, and curious pet.

The breed loves to please people and can do many tricks. Even with its history of traveling on water, they are not water dogs. Although they love retrieving games on land and water, Bichon Frise dogs can get territorial. They want constant attention. They can get destructive and lonely.

How do its conflicting traits work well? Your Lachon can get traits from either of these breeds or a combination of them. All it takes is proper training to mold its behavior and take advantage of both breeds’ intellect. 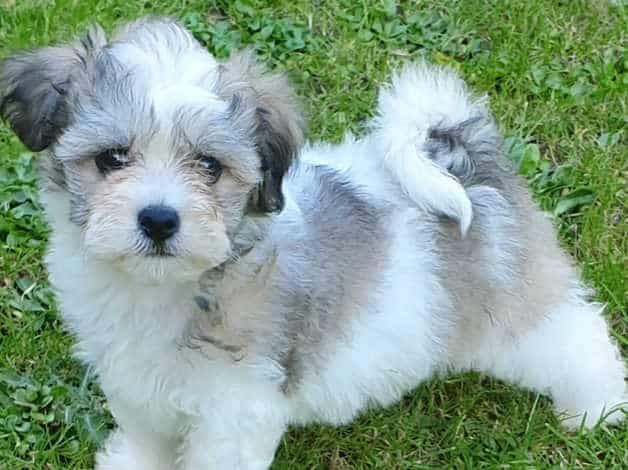 Your Lachon can have a combination of its parents’ appearance. It naturally grows dense and wavy double-coated fur that can come in white, cream, brown, or black. It stands with the typical height of a hybrid dog and weighs just average if not overfed. It has a round head with a short muzzle and a black nose. Its long beard covers either blue or dark brown almond-shaped eyes. Over-all, this mix resembles its parent, Bichon Frise.

Both its parents are naturally healthy breeds. It can live up to 16 years or more especially if you take very good care of them.

Your Lachon’s behavior depends on your training.

However, Lachons are, most of the time, cuddly, friendly, attentive, and smart. They can always show a curious look and be sensitive over one’s feelings. They have great expressions that could cheer a sad family member. They have high emotional intelligence. However, it doesn’t mean they can’t be smart. They are easy to train. You can mold them like you raise a child. They pick up things easily, and learn more tricks in no time.

However, they can be hard to potty train. It requires consistency and patience too.

They’re natural show-offs and love cuddling. They love children and get along with other pets when socialized early. Be wary when you have to leave your Lachon because they don’t like being left alone and can develop destructive habits.

Your Lachon may develop its watchdog’s keenness. He may start barking at strangers. This trait comes from its parent’s strong sense of hearing.

As a companion dog, it can be a great family dog who loves to please people and be protective at times.

Lachons are comfortable both indoors and outdoors.

Since it loves cuddling with humans, it may spend most of the time indoors. However, you’ll still have to take it to the park if you don’t have a fenced in yard. It may not be a hyper dog but it’s energetic. You should bring your puppy outside for its daily 30-minute activities.

Because of its furry coat, your Lachon may find it hard to deal with a warm climate.

Just like any other hybrid dog, your Lachon should have moderate meals per day. It naturally has a small physique. Do not let its small body carry excess weight. You can feed it with ¾ to 1 ½ cups of quality dry dog food each day. You can separate them into two or three meals. We feed our small dogs twice daily. Make sure you feed them food with high nutrition.

Its 30-minute daily exercise can be a mix of indoor and outdoor activities. Teach him tricks when you play indoors. Take a couple of walks outside. He enjoys retrieving games in the yard. Teach him outside tricks as it’s a natural performer.

House training can be hard for Lachons. See, it has inborn manipulative, willful, and independent traits from the Lhasa Apso. Crate training and potty training require a lot of patience, consistency, and firmness. It pays to start training your Lachon early before it develops destructive habits or starts doing things its way. Show your dog who the pack leader is.

However, remember that your Lachon appreciates positive reinforcement and rewards. It doesn’t like harsh punishments. You can be firm as a pack leader with a handful of treats on your palm.

Lachons have furry parents. Both of its parents’ coats shed very little. That makes a Lachon good for owners with allergies.

He has thick and dense fur that requires frequent brushing each week. That is, if you want to grow its hair.  You can bring him to a professional groomer every few months. Do this when the warm season comes in. It can host ticks and fleas that may irritate its skin.

Always find time to check its ears as they can grow hair inside. It can lead to ear problems. Pluck them and clean their ears when needed.

Trim its nails before they grow long and brush its teeth a few times each week.

Lachons have healthy parents that naturally live longer than ordinary hybrid dogs. Most of them die because of aging rather than illness. With a proper diet, you can keep your Lachon from having excess weight.

However, do not deprive him of getting occasional tests on the hips, knees, x-rays, or physical examinations. Although it doesn’t happen to every Lachon, you may encounter a few concerns like kidney problems, hip dysplasia, allergies, patellar luxation, skin problems, sensitivity to vaccines, bladder problems, and eye problems.

You may want to check the health clearance of its parents before buying a Lachon pup.

Where to get your new Lachon pup?

Visit a pet shop. Check the pup and its parent’s documents. You can get it at a physical pet store. If you want to raise a healthy pet, avoid puppy mills.

You can also check online and join communities of Lachon or dog owners. There are plenty of reviews and feedback available from there.

You can also get one from verified and reputable dog breeders. Always check the pup before getting one. Make sure you read a lot about Lachons before dealing with dog breeders.

If you have fully decided to get a Lachon, make sure you prepare your budget and your family. Allocate a budget for its papers, place in the house, food, check-ups, grooming, and vitamins. Adopting a Lachon might just be one of your better decisions in life!

Back To Small Mixed Breeds

Chiweenie: A Friendly, Loving and Spunky Companion
Terripoo: Smart And Curious Adventurers
Maltichon: A Playful, Energetic Crossbreed
Pinny Poo: The Adorable, Loyal, And Loving Doggy
Will The Lhasapoo Be The One For You?
Tweet
Pin13
Share44
57 Shares