The Pomchi is a crossbreed between two small dog breeds: the Chihuahua and the Pomeranian. It’s affectionate, which makes people love this tiny dog. The designer dog is also known as Chipom, Chiapom, Pomachi, and Chiranian.

Pomchis are bred from Chihuahuas and Pomeranians, two toy dog breeds that are popular among dog lovers all around the world. It’s no wonder why dog breeders tried to mix the two, and they’ve succeeded in mixing an even cuter version of the two dog breeds.

They’re named after the Mexican state of Chihuahua. Chihuahuas come in many colors and two coat lengths. They are only 15 to 23 cm. tall and they don’t weigh more than 3 kg. Their most notable qualities include devotion to their owners and their liveliness. Despite their diminutive size, they’re quite alert and courageous.

Pomeranians are German Spitz-type toy dogs. Their name comes from the Pomerania region in Poland and Germany. They were popular pets in the 18th century to royalties such as Queen Victoria.

Pomeranians are ideal pets for small households with children. They don’t weigh more than 4 kg and they only grow up to 11 inches high. They have thick coats that need daily maintenance because of their constant shedding. They’re friendly, lively, and playful. They can also be aggressive to other dogs.

Since they’re a mix of two small breeds, Pomchis are also small. They weigh between 5 to 12 pounds. Male Pomchis are taller than females, and their standard height is between 6 to 10 inches.

Pomchis come in a variety of colors and coats, but they’re commonly light brown. Black Pomchis are rare, which makes them highly sought after. Pomchis can also have a coat with more than one color, depending on the colors of the parents.

They can have long or short coats. They can also have single or double coats. Like all long coated dogs, they need to be groomed to look their best. Daily grooming is usually advised, especially for Pomchis with undercoats. Male Pomchis would shed once a year, so it won’t be much of a problem. Healthy Pomchis have a shiny and soft coat.

Their lifespan depends on their parent dogs. Pomeranians live anywhere between 9 and 14 years, while Chihuahuas can live between 7 and 16 years. Pomchis owners can expect their pets to live around 12 years.

Mixed dog breeds live longer than purebreds. There’s a great chance that Pomchi owners will live with their furbabies for a long time.

Pomchis have their unique and special temperament. They usually inherit bits of their parent breeds’ characters. However, it’s impossible to determine if they will have more dominant characters of a Pomeranian or a Chihuahua.

Pomeranians are curious little critters. They’re fun and cheerful. They’re obedient and friendly, that’s why it’s easy to train them. Their friendly and approachable character makes them great pets for young children.

Chihuahuas are lively and alert. They’re easily scared, so they can get nervous and aggressive, especially with strangers. They don’t back down when threatened by larger breeds.

Knowing the Pomchi’s parents’ behavior will help understand your pet’s own behavior. A common trait that Pomchis have is their tendency to experience separation anxiety. They can get really attached to their owners. That’s why they can get quite stressed out when left alone.

Pomchis hate the feeling of being alone. People who are always busy at work and are mostly away should think twice before getting a Pomchi.

Their size makes them easy to handle in small-spaced homes. They’re not built for harsh environments, so they’re ideally kept indoors most of the time. Keeping them inside your home won’t be much of a problem.

They just need training and enough exercise. They also need to be given enough attention.

Pomchis are fragile, so being around very young children can be stressful for them. They’re part Chihuahua, which can makes them aggressive. Make sure your children understand how to properly approach and care for Pomchis. It will ensure the dog’s and child’s safety.

Still, they will need guidance and help when introduced to other dogs.

Rescued and adopted Pomchis would need extra help with socializing.

Pomchis have a high risk of being overweight. It’s important to know the right kind of diet for them. Since they’re considered as toy dogs, they have great needs, especially when it comes to nutrition.

Pomchis have an active metabolism. It means they tend to digest their food faster. They need high amounts of calories per pound of their body weight. Again, they have a high risk of getting too heavy. It’s important to feed them with dog food specifically made for toy or small breeds. Follow the recommended food servings to avoid overfeeding them. It will also be better to break their daily portions into more frequent, smaller meals.

There are other factors that you need to consider before buying dog food for your Pomchi. Chihuahuas are highly prone to have low blood sugar, and Pomeranians can suffer from hypothyroidism. Keep track of their energy levels and weight gains to know if they are suffering from any kind of health problem. If you notice something unusual, take the Pomchi to the vet immediately. They will be able to determine the problem, and it’ll be a lot easier to adjust their diet accordingly.

Giving your Pomchi some treats is part of their training rewards. But, there are foods that they can’t eat and can be dangerous for their health. While there haven’t been any specific studies done on harmful food for Pomchis, foods that aren’t safe for Pomeranians and Chihuahuas would most likely have the same effect to Pomchis. Here are some foods that wouldn’t hurt to avoid feeding them.

There are still tons of food items that may cause health problems to Pomchis. It’s important to ask a vet or do enough research before giving them any kind of human food.

Pomchis might be active dogs, but their small bodies can’t handle a lot of physical activities. They need exercise like any other dog breed, but they don’t need too much.

Giving Pomchi toys to play with can give them enough exercise inside the house. They love their toys. They can spend hours just playing with them. Toys keep them busy and happy, but they can easily get bored. Just make sure to stock up on a lot of little toys to keep them engaged.

Pomchis need their daily walks. Taking them outdoors is not only for their physical health. They also need to see, smell, and hear different things to keep them happy and mentally fit.

Despite their small physique and small head, Pomchis are intelligent dogs. They learn quickly. They enjoy being trained and learning new tricks. They’re observant and are great problem solvers.

To effectively train Pomchis, it should start at a young age. They can be trained as early as 12 weeks old. Starting young will help ensure they will grow up to be better behaved and well-rounded adult dogs.

Pomchis are quite difficult to housebreak. They tend to be quite stubborn like Chihuahuas. The trick is to be extra patient when training them. Showing impatience will have an impact on the Pomchi’s mood. They will start feeling frustrated and it’ll be harder to train them.

Hiring professional trainers will definitely be easier. But, owners that train their pups themselves develop better and stronger bond with their Pomchis. Training isn’t an easy task. If they’re not trained successfully, they can become a handful and hard to deal with. Research and read about positive training methods, but show them who the leader is and who they should obey.

As mentioned, Pomchis can either sport a short or long coat. A short coat doesn’t need much maintenance, but they should still be looked after. Brushing their fur regularly will result in a shiny, healthy coat. If neglected, they’ll have matted fur. Any dog with matted fur is not pleasant. They’ll also feel depressed and unloved, being uncomfortable with their ungroomed fur. 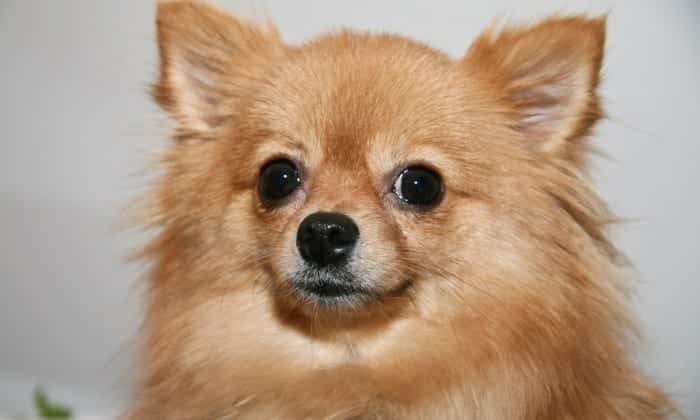 Before starting a grooming routine with your Pomchi, remember that they often have sensitive skin. Opt to use soft-bristled brushes instead of metal ones. It’s safer to use mild shampoo made specifically for dogs every so often. Their nails also need to be clipped, and their fur trimmed regularly. It’ll be better to hire professional service if there isn’t any proper equipment available.

Despite being healthier than most purebred dogs, Pomchis can also suffer from health issues. They can inherit some of their purebred parents’ illnesses.

They can suffer from hypoglycemia, heart problems, epilepsy, eye problems, allergies, hip dysplasia, and dental problems. These are just a few of the many health risks that Pomchis can have.

It’s best to check and confirm that the Pomchi’s parents are healthy and free from illnesses. If the parents have any history of illnesses, there’s a great chance that the Pomchi will inherit them.

How Much Does a Pomchi Puppy Cost?

Pomchi puppies can cost between $500 to about $5,500. It depends on where they’re sold and the quality of the puppies. Puppies that have lower prices usually do not have papers and breeding rights. It’s not recommended to buy a puppy without any papers.

Before buying a Pomchi puppy, it’s important to understand that the responsibility of owning a dog comes with a price. Make sure to have enough money for food, grooming and vet bills. An estimate of $500 to $3,000 yearly should be set aside for a single dog’s needs.

Back To Small Mixed Breed Dogs

Pet Owner's Guide to the Chion
Cairnoodle: All You Need To Know About This Adorable Dog
Schnocker: An Eager And Excited Puppy
Terripoo: Smart And Curious Adventurers
What To Look For When Buying A Bernedoodle Puppy
Tweet
Pin5
Share101
106 Shares