If you are in search for a sweet and intelligent puppy who can be a good companion or family dog – but you have space constraints – then the Schweenie dog breed may be right for you. He enjoys being with people most of the time, although he may want to exercise his independence from time to time. Unlike other breeds, he is relatively easy to train and does not need much exercise.

The Schweenie is a designer dog or a mixed dog that was deliberately bred. Because the Schweenie is not a purebred, the breed is not listed with the AKC. He is a cross between a Dachshund and a Shih Tzu. Thus, he carries a combination of the looks and traits of his parents.

Dachshund – Originally from Germany, the breed is intended to hunt foxes, badgers, and other den animals. A pack of Dachshunds is capable of hunting much bigger prey like deer or wild boars. During the 15th century, the dogs’ size depended on the prey they were supposed to hunt. However, the breed started to be bred as companion dogs in the 19th century. Dachshunds came to America at the end of the 19th century.

Today, Dachshunds are known to be clever, lively, and bold, but tend to be stubborn at times. They need to be cuddled when they don’t get their own way. They come in 3 coat types that may be indicative of the dog’s personality. Wirehaired Dachshunds are cheeky and adventurous. Long-haired ones are generally even tempered, while those with smooth coats are a mix of both. Shyness is indicative of poor line and breeding.

Shih Tzu – Originating from Tibet and China, the Shih Tzu is an old breed that are famous for being companion dogs. Also known as little lion dogs, they are cheerful, gentle, and intelligent. The breed came to England early in the 20th century, and was recognized by the kennel club in the UK in 1928, long before the breed was recognized in America in 1969.

At present, Shih Tzus are known for being friendly companions. They are very affectionate, and always want to please and be with their humans. They also crave for affection, and won’t mind spending a lot of time on their owner’s lap. A lively and playful breed, Shi Tzus will be happy and contented as long as they get a lot of attention.

The Schweenie dog takes his physical characteristics from his parents. He is a bit longer than the Dachshund with short legs and broad shoulders. He has dark eyes, floppy ears, big feet, and a thin, long, curved tail. Just like the Shih Tzu, his coat may be silky and long.

However, it may likewise be shiny and short or a bit ragged and of medium length. The coat color may be gold, brown, black, white, orange, or cream. The Schweenie, in general, can be classified as a small dog as he stands only around 11 – 20 inches tall, and weighs anywhere from 9 – 20 pounds.

Known to be very loyal and loving, Schweenies are smart, gentle and sweet dogs. They enjoy receiving treats and they love to chew. They love to get attention and being cuddled. However, they want to have them whenever they want and in their own terms. This is part of their stubborn side, and they can be very verbal as well.

The breed is quite social. They love it when their entire human family and other people are around. They are inquisitive, but they tend to be moody at times. When left alone for long stretches of time, they can exhibit signs of separation anxiety.

Because he is not a particularly active dog, the Schweenie does not need a lot of physical activity to keep in shape and to be happy. This makes him the perfect companion for people who are not physically active as well. The Schweenie loves to play, and a good part of his indoor playtime can already cover for his exercise needs.

As a small dog, his size allows him to easily adapt to apartment living, and having a yard to play on would be nice, but not really necessary. 20 – 30 minutes of walks each day sprinkled with occasional trips to the park would be enough for him.

While your pup may be comparatively easy to train, it may take a little time and patience, given his stubborn streak. This is particularly true when house training him. Positive methods are encouraged. You need to be fair but consistent. Using praise, treats, and other forms of reward to encourage him will usually work. He must be trained and given opportunities to socialize as early as possible.

In terms of maintenance, your furry friend would not require much. Depending on his coat, he may shed anywhere from lightly to moderately. He may also need to be brought to a groomer every other month for regular trimming. If he has a long coat, you must make sure to brush it every day to get rid of tangles. On the other hand, you need not bother as much if he has a shorter coat.

Give him a bath only when necessary. Bathing him too often may cause damage to the natural oils on his skin. Check and clean his ears every week. Brush his teeth 2 or 3 times each week. Clip his nails when they have grown too long, but make sure it is done with caution. To be on the safe side, you may let the groomers do the clipping for you.

Schweenies with Kids and Other Animals

Your Schweenie gets along well with other animals, but he may sometimes chase smaller pets like prey. With proper training and socialization, he would interact well with children, particularly when they are raised together. This is most evident during playtime.

Schweenies may be prone to or inherit health concerns from their parent breeds. These include epilepsy, IVDD, bloat, eye problems, diabetes, cushings, patellar luxation, deafness, bladder and kidney problems, umbilical hernia, liver problems, reverse sneezing, and snuffles. If possible, before picking up the puppy from the breeders, visit him first to see the environment the litter is kept in, and check the health of the other animals. Request to see the parents’ health clearances.

Costs Involved in Raising a Schweenie

A pup costs anywhere between $75 and $900. Necessary things like micro chipping, deworming, blood tests, shots, neutering, leash and collar, carrier, and crate may run up to around $500. Annual bills for medical needs like flea prevention, check-ups, and insurance may run up to $600. You must also set aside around $700 a year for non-medical essentials that include food, treats, toys, license, grooming, and training.

In general, Schweenies may be anywhere from occasional to frequent barkers. Thus, you may have to reconsider if noise is a major concern for you or where you live. For his nutrition, you must feed him ¾ to 1 ½ cups of dry, high quality dog food daily, split into 2 meals.

Taking a new puppy home is like welcoming a new member of your family. It is a lifetime commitment. Thus, it is important that you learn everything about the breed before making the commitment. 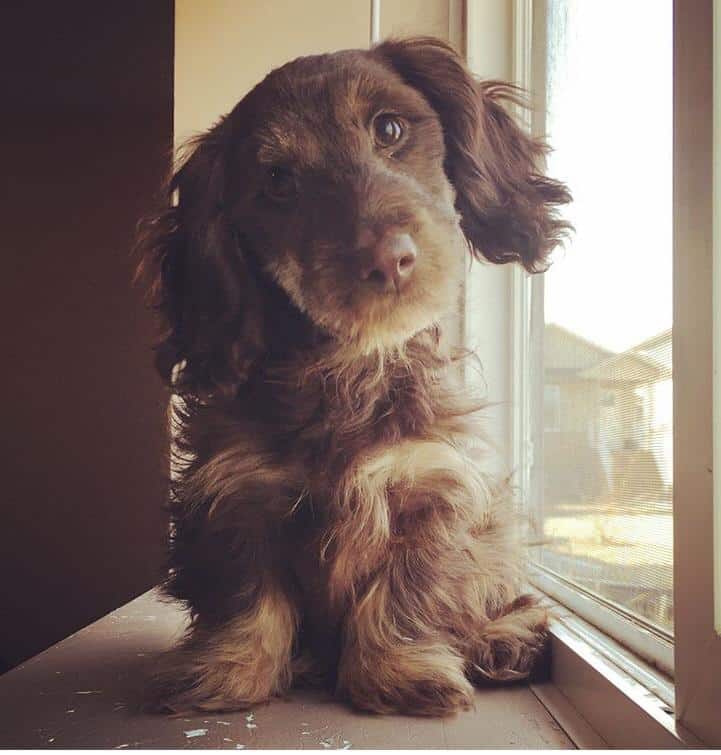 The Meagle: Eager And Cute Little Beamers
Is A Maltipoo In Your Future?
Pomeagle: The Devoted And Energetic Dog
Mauxie: A Playful and Hyperactive Companion
Is A Yorkie Poo The One For You?
Tweet
Pin4
Share9
13 Shares