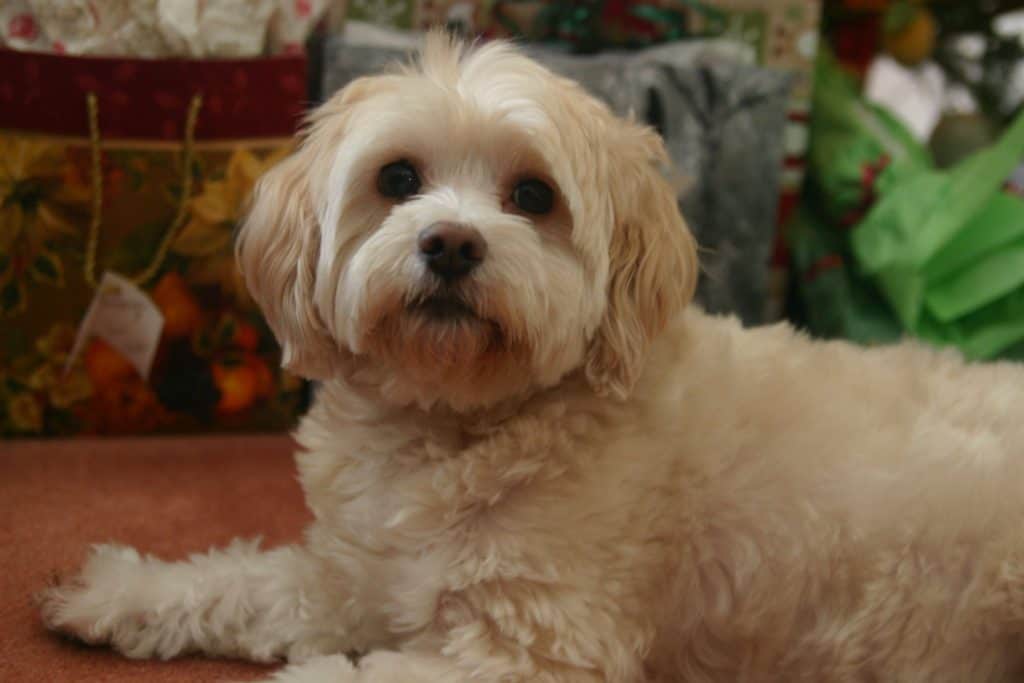 The Terripoo dog is an Australian Terrier and Poodle Crossbreed. They are among the cross-breeds that boomed in popularity during the 1980s.  Known for being attention-seekers, Terripoos need to be trained at an early age in order for them to act tame around children and the elderly while being friendly towards other animals.

The Terripoo tends to be more active and vocal than most poodle breeds, and they’re extremely friendly. Still, they can be the perfect watchdog when trained properly. They also go by another cute nickname—Terridoodle.

Terripoo dogs come in a variety of colors, too. The color they inherit depends on the color of their parents. But, it’s interesting to note that most Terripoos have dark-colored fur.

The parents of the Terripoo are none other than the mischievous Australian Terrier and the smart and loyal Poodle. Australian Terriers make the greatest companion as they love watching over both children and the elderly. The first representative of this breed hailed from Melbourne in 1868 and had their official name in 1897. They’re also the first dog breed that hailed from Australia.

Their original purpose was to be a companion to farmers and hunt down any pests or animals that are causing damage. Because of their vocal nature, they likewise serve as an alarm and were trained to protect sheep.

Poodles, on the other hand, are infamous for being one of the smartest dog breeds in existence. Appearance-wise they appear to be proud and elegant show dogs, but they were originally known as “water retrievers” and were trained to assist in hunting ducks with their water-resistant coat. Poodles originated in Germany during the 19th century, but France was the country that considered the standard-sized Poodle to be a national breed.

Poodles also come in three types which include the standard size, but the miniature and toy breeds are more preferred by dog lovers for their convenient sizes. Both breeds are just right for a cuddly, warm, and loving addition to a household as both the Australian Terrier and the Poodle are very attentive to their owners.

There are two distinct looks that that the Terripoo can inherit from its parents—straight and shaggy (which comes from their Australian Terrier parent) or short and curly (which is from the look of their Poodle parent). Terripoos are also one of the hypo-allergenic breeds and don’t shed a lot. They can weigh around 12 to 14 pounds, and have an average height of 15 inches.

Terripoo dogs have a water-resistant coat like their Poodle parent, but is surprisingly low maintenance. Grooming them 2 to 3 times a week would be enough. Despite that, occasionally having them groomed by a professional does help maintain their precious yet rough and harsh coats.

Always remember to check and clean their ears, as well as to brush their teeth, to avoid infections. Mixed breeds are reported to be more prone to diseases because of their genetics. And so, these grooming tasks serve another purpose, which is to check for early signs of health issues. 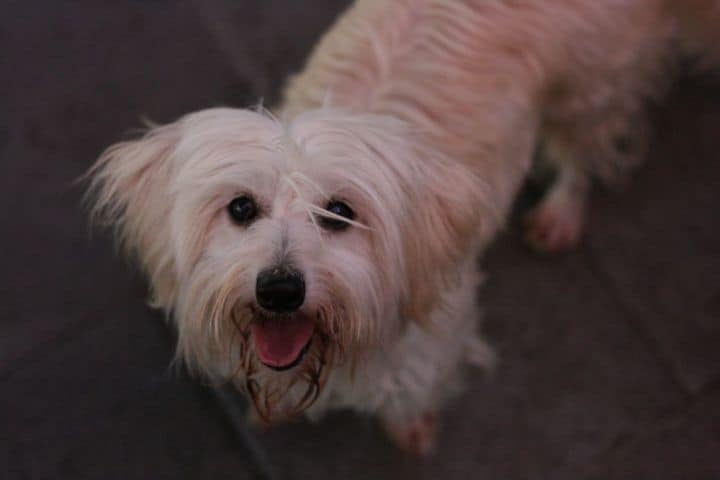 Just like their parents, Terripoos are expected to live from 10 up to 15 years. It doesn’t matter what type of Terripoo pup you have, all types have the same life expectancy. Still, it’s not unlikely for them to surpass those numbers, provided that they are living in a good and very loving household.

If you have acquired a miniature or toy-sized Terripoo and expect it to live longer than it should, it would be best to expose the puppy to a lot of things. Terripoos are playful and curious, but they also listen well so muster up a lot of patience and train your pup to get used to different sceneries, different animals, and other people as well while they’re still young.

You can expect your Terridoodle to end up wandering off everywhere. They are the types of dogs to bark at a falling leaf, get excited over snow, and be your typical energetic dog. Curious, smart, attention-seeking, adventurous, athletic, and many more active traits come to mind with this breed.

They can look after children, especially babies, and the elderly very well. On the other hand, they’re also alert and can definitely act like hunting dogs given the right training since those are the common behaviors of their Australian Terrier parent.

Just like most dog breeds, Terripoos cry easily and get sulky when left alone for a short while. It is important to pay attention to your dog’s personality and take note of the things that stress him out.

Terripoos enjoy being surrounded by a lot of people. They easily get bored but are extremely sociable so they would prefer taking short walks to the dog park, getting greeted and patted by strangers, and interacting with other dogs.

Food is a necessity for you, your family, and your rapidly growing dog.

Healthy food for dogs is rarely cheap. High-quality kibble is always highly recommended if you want your dog to have great resistance against various illnesses. And, keep in mind—exercises should be done at least an hour before you let your pup eat.

Vets will often explain to you how your dog should be treated with every appointment that you make. Since the Terripoo varies from a standard-sized breed to miniature and toy breeds, it is best to ask for recommendations on which specific types of dog food to go for. This is mainly ensure that your pup is getting the correct amount and variety of nutrients as he grows.

The Terripoo is a dog that requires a lot of attention, but it’s mostly just them being very playful.

Boredom is something they hate, so make sure that their playtime involves fun activities. A simple game of fetch can keep them entertained but taking them outside for a short walk or hanging out at a dog park for an hour also counts as a valid exercise.

Terripoos tend to have the attention span of a goldfish if they aren’t trained well. Let them play with your kids and take them out for a jog. Catching frisbees hypes them up as well.

Here’s something that you really need to keep in mind though—this breed gets irritated easily and may start a tantrum when they’re dissatisfied with something. Exercising daily for at least an hour keeps your Terripoo in great mood and in-shape. 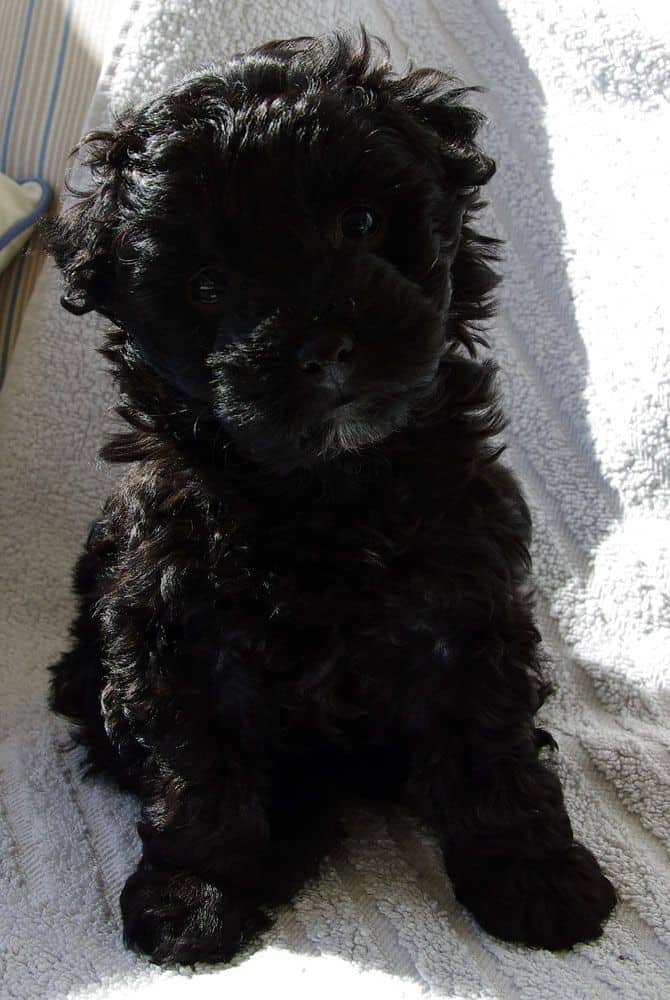 Terripoos at first cannot sit still in one place. You need to ensure that the dog’s focus will be on you and you alone. Starting with the simple commands would be the best, and always reward your canine companion with treats once he successfully does what you told him to do.

Let your Terripoo get used to everybody’s face in the household and ask for everyone’s participation in training him so that the pup will have a positive memory of each person and recognize them as family.

What about potty training? Well, Terripoos aren’t that different from other breeds. Yelling at them will get their attention, but it will also make them confused. After all, they STILL do not know where they should be relieving themselves.

Whenever you notice that your dog is about to pee or poop, call his name and lead him immediately to where he should be. Terripoos are territorial so they would know the exact spot they recently peed or pooped on.

Observe him well and the next time he goes to the same spot, give him a treat fast! Yes, he’ll be munching while he’s at it since he only gets the memo at the very moment he starts to do something.

Terripoos are low-maintenance dogs. They don’t shed a lot and only require grooming about 2 to 3 times a week. Occasionally have a professional groom them for a stylish look and to maintain the quality of their coats.

Designer dogs like the Terripoo are known to be relatively healthier than their parents.

Since the Australian Terrier is also a mixed breed though, the Terridoodle may inherit a certain illness that the “Aussie” has, all while having the resistance of its Poodle parent.

The different sizes of a Terripoo means that the diseases may also vary, so it is important to let the vet have a look at your pup when you notice that something is off with his behavior.

Terripoos are more likely to have the diseases that most small mixed breed dogs have like Cushing’s disease, joint issues, hypothyroidism, and diabetes.

If you want to own a Terridoodle but you do not personally know any breeders, the wisest decision would be to do some research and find a credible discussion board online that helps out aspiring fur-parents.

Before adopting though, always ask for the necessary papers to see if the pup has received proper medication and ask for a copy of his parents’ information.

Aside from that, be sure to ask for some information regarding their breeding process and all other relevant details just to ensure that the pup you’re adopting is healthy and well-taken care of.

Of course, there’s also the option of fostering one first, instead of going for adoption outright. Rescue groups specializing in Terripoos (or Terriers) should have fostering programs in place for anyone who’s interested in finding out what it’s really like to have a Terripoo around.

What’s really great about this option though, is that if you end up liking the pooch you’ve been paired with and he likes being around you as well, you could simply proceed with the adoption.

Terripoos are one of the most wonderful pets anyone could have. Even if they are fairly low-maintenance dogs, they can bring out your positive side just by simply giving you a loving lick on the face with their attention-seeking personality.

They serve many purposes in a household, but if you have a Terripoo by your side, you’re never going to feel lonely. Taming them may be a challenge at first, but the process of seeing them grow by your side is one of the ultimate joys this pup can give to you, your friends, and your family.

You Can Call Me Chipoo Or Poochi…I’m Still Cute!
The Foodle: A Playful Companion That Can Double As A Loyal Guard Dog
Check Out The Wauzer
Top 17 Tips for Future Shorkie Owners
Cava-tzu: The tzu-per cute, smart and playful little dog for the whole family
Tweet
Pin6
Share54
60 Shares