Yorkie Pins are also best-known for their hyperactive nature, particularly when chasing small animals such as mice and rats. This hunting trait was inherited from both Miniature Pinscher and Yorkshire terrier parents, which were separately bred for the purpose of hunting down rats.

The Yorkie Pin originated in the United States, but there is no information on which group of breeders developed and produced the breed.

The Miniature Pinscher or Min Pin is a small breed type of dog classified under the companion toy dog group. The Min-Pin’s origin is unknown, but it is considered an old breed that was recognized to exist just 200 years ago. The Min-Pin was specifically bred for the purpose of hunting and killing vermin and rats in large animal stables and homes. Full of energy and bearing a happy nature, the Min-Pin is a great addition to a dog-loving family.

Developed for chasing rodents and rats in woolen and cotton mills, the lovable working class breed became a favorite pet among fashionable ladies of the late Victorian era. Affectionate but at the same time alert and noisy due to its Terrier origins, the Yorkie is one lovable guard dog despite its small size and cute looks.

The Yorkie Pin’s being a cross breed between two parent genes with extremely different appearances can reveal a variety of looks and physical traits in puppies belonging to the same litter.

Yorkie Pins, in general, have a small compact size with brown eyes and a fur color that is either black or brown with a sprinkle of white. The similarity ends when it comes to the dog’s coats and ear shape.

The Yorkie gene dominates if the pup reveals a long, flowing coat with pointed ears, and the Miniature Pinscher traits appear if the dog reveals a smooth and shorter coat with ears that are long and much more angular in shape. Either way, the dog will still be cute and cuddly whatever dominating looks it would reveal.

A healthy Yorkie Pin will more or less be small at around 7–13 inches in height and would weigh at around 6-10 pounds. Its coat is considered hypoallergenic if the pup inherits the Yorkshire trait. The Yorkie Min-Pin is expected to live from 12 to 15 years on the condition that adequate care and suitable environment is provided.

The Yorkie Pin exudes confidence, bravery with a dash of eternal curiosity, and a craving to be the center of attention – always. Its hunting trait and alertness to strangers (an occasional but not forceful barking), which was inherited from its parent breeds, makes the Yorkie Pin a good watchdog.

Unfortunately, the inherited traits of hunting ability, curiosity, and fearlessness often lead to innocent mischief. The dog requires constant supervision. It has the habit of escaping out of open doors, which might get your furry friend into trouble.

The yearning for constant attention is also the dog’s downside. It has a tendency to follow the owner around the house. If left alone for a long period of time, the dog turns anxious, gets into a panic and an agitated state. It is advised that potential Yorkie Pin owners should not acquire the dog if they cannot guarantee constant companionship.

As much as the Yorkie Pin is loveable, its inherited aggression and fearless attitude might not be appropriate for very young children. Older children, preferably of school-age, might better appreciate the dog’s happy and active nature.

The Yorkie Pin, being small in size, can live in any type of dwelling. It can do well in small to large houses, town homes, condominiums or apartments. Like humans, cleanliness and a temperate climate in the home is a must. The home must be cleared of things that the dog can reach, then bite or swallow such as coins, hairpins, keys, shoes, etc.

A newly adopted pup should be exposed to normal household noises to minimize the animal’s anxiety and stress. Exposure should be slow and deliberate. Loud noises and heavy or constant foot traffic should be minimized or completely avoided, if possible.

The very active and curious nature of Yorkie Pins exposes them to injuries in the home such as when jumping off furniture. It is best that ramps or doggie steps be attached to sofas or beds to avoid accidents.

A Yorkie Pin puppy is recommended to be fed 3/5 cup dry or commercial food a day, while an adult dog is advised to be fed ½ to 1 cup of dry dog food.

Having inherited its genes from its Yorkie parent, a puppy or adult dog is recommended to be fed at least three times a day to avoid experiencing hypoglycemia (low blood sugar).

The Yorkie Pin, because of its size and heft, does not require much time and vigorous activity in terms of exercise. On the average, the dog requires medium intensity play at no more than 45 minutes each day, and outdoor walks of at most six miles per week.

Being a designer breed, other factors might come into play when considering the Yorkie Pin’s activity needs based on its physical appearance. If the predominant trait is from the Yorkshire terrier parent, your pet would require just 30 minutes of play, while if the Mini Pinscher trait is predominant, 60 minutes of activity would be ideal.

In terms of a full exercise, nothing beats getting out of one’s home and encouraging the dog to walk at a regular pace. Aside from the health benefits, a leisurely walk allows the animal to have a lot of fresh air and getting familiar with places, people, and other dogs animals.

A less vigorous activity, but still considered healthy for your dog is sleep. A young pup needs an average of 15 hours of sleep a day, while for an adult an average of 13 to 18 hours a day of sleep is necessary.

Keeping the dog as comfortable as possible is a must, and a good quality dog bed with a pee pad is recommended for quality rest. 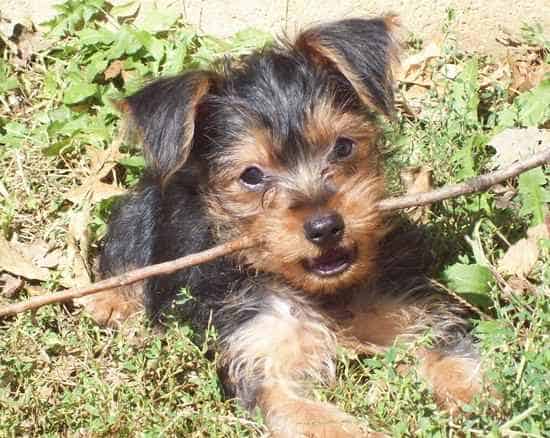 Experts recommend that training a Yorkie Pin must start at a young age or during the puppy stage. The owner/trainer must be gentle but assertive when training the dog. Giving rewards in the form of treats every time the dog accomplishes a task is recommended.

A way to relieve dog anxiety when being introduced to a new environment is to give him long-lasting chew toys or treats.

Proper socialization is necessary to allow the dog to get used to the owner’s and the rest of the family’s presence. This type of familiarization would result in a confident pet that is ready and willing to meet extended members of the family, friends, and other pets.

In situations that a Yorkie Pin has to be left alone for some time, it is advised that an owner should consider putting the pet in a crate. To minimize stress, the pet should be given enough time to explore the surroundings. The dog should be allowed to freely move in and out of the container.

At the same time, fill the crate with hidden treats and chew toys. This training activity would take some time and should end once the dog shows no sign of anxiety or panic when placed in the enclosure.

Being a designer breed, grooming a Yorkie Pin would depend on its inherited appearance. If the dog gets its look from its Miniature Pinscher parent, then its short coat should be groomed once a week with slicker and pin brushes. If the canine presents a Yorkie appearance, then its long coat must be groomed daily with a pin brush and a comb.

Shedding of the coat is minimal and shampooing will keep the coat looking clean and fresh. Yorkie Pins with long hair need to get periodical trimmings.

Constant brushing of their teeth would help maintain a strong and healthy set of teeth.

Nail clipping is best left to the grooming experts. An uncomfortable, inexperienced, or new dog owner should never clip the dog’s nails without having the proper training and confidence.

As far as expenses are concerned, it is estimated that an owner will have to spend from 270 to 370 dollars per year on average for pet grooming, and could be more if constant grooming is a must.

The Yorkie Pin can inherit the Miniature Pinscher and Yorkie’s health conditions such as eye problems, hypothyroidism, epilepsy, patellar luxation, and hypoglycemia.

These health issues can be avoided with proper physical care, constant attention, and proper diet. A medical record should be kept or should be requested if one is not the original owner or breeder.

Preventive health costs, which include vet visits and examinations, deworming, blood tests, vaccinations, flea treatment/prevention, and vaccine shots would cost a yearly average of 435 to 535 dollars.

Consult a veterinarian as soon as you notice any sign that the dog may be ill.

Where to Look for a Yorkie Pin

The breed can be found in select pet shops. You can ask from friends or dog breeders. You can also check out the Internet for reliable Yorkie Pin breeders who are willing to sell (or give away) their pups. The estimated cost of purchasing a puppy would be from 250 to 700 dollars.

The Yorkie Pin’s ancestry reveals the breed’s enthusiasm for adventure, exploration, action, and curiosity. It is an ideal companion and people pleaser with a need for constant attention and love. With its size, it can easily adapt and be happy in any home as long as it has its share of care, food, long walks, and play.

Top 17 Tips for Future Shorkie Owners
The Shih Apso: Facts Behind This Irresistibly Lovable Mix Breed
Is A Maltipoo In Your Future?
Chin Wa: The Happy, Sassy, And Clever Little Dog
Havaton: Just Gotta Have One
Tweet
Pin8
Share52
60 Shares