The Cheagle is a mixed-breed of two famous designer dogs, the affectionate English Beagle and the spunky Mexican Chihuahua. The mix of these two breeds produced a loving and playful little dog that likes to tail around their owner. The Cheagle usually has a broad head like the Beagle and a snout like that of the Chihuahua.

These tiny dogs are too small to become hunting dogs, but they are perfect home pets. They have floppy, long ears and dark brown eyes. Compared to other dogs, Cheagles require less grooming and exercise. However, they are quite susceptible to eye and heart problems. If you are interested in adopting this kind of dog, read on for a more detailed discussion about Cheagles.

As mentioned above, the Cheagle was made from the crossing of the Beagle, a tiny tracking dog, and the Chihuahua, a small companion pet.

The Beagle has been a popular tracking dog for many centuries. They have a keen sense of smell, making them a perfect hunter, usually of rabbits. They also make great companions during hikes and can be good family dogs. The breed’s history is a bit uncertain. They were first known to humans during the 19th century, but it is said that their existence dated back to as early as 400 B.C. It is believed that the Romans had dogs that were similar to Beagles, which they used to hunt hares.

In 1066, William the Conqueror brought with him dogs that would become the ancestors of the Beagle, the Talbot. The Beagle breed has slightly evolved through the years. Glove Beagles were popularly owned by the nobility during the 1300s. There was a period when an even smaller version of the standard Beagle was bred, called the “Pocket” Beagle.

This breed’s popularity dropped when fox hunting became a trend, because then, Foxhounds were the thing. It is said that the Beagle was saved from extinction because farmers continued to keep them. Breeding standards for Beagles were established during the late 1800s, the period when the Beagle Club in England and the National Beagle Club of the United States were formed and recognized.

The full history of the Chihuahua is unknown, but there are two popular theories about the breed’s origins. One is that they came from the ancient Techichi, a breed native to Mexico. These dogs were kept as pets by the Aztecs or made as religious sacrifices. The other theory is that they were brought by Spanish traders from China to Mexico, where they continued breeding them and became native dogs.

What is certain is that a few of the earliest Chihuahuas were found in Mexico during the middle of the 1800s. During this time, the breed did not yet have an official name. Mexican merchants from a state called Chihuahua began to market these friendly animals to people visiting their place. In 1904, the breed was officially recognized by the American Kennel Club.

The Cheagle’s appearance is usually a balance of its parent breeds. It is a very small dog, typically having a round, broad head and measuring less than a foot in height. It has brown eyes, and a short and pointed muzzle resembling that of a Chihuahua’s.

There are some Cheagles who have wider and longer muzzles, taking from their Beagle parent. Most Cheagles have ears that flop down the sides of their heads, but there are a few with tiny, triangular upright ears like that of a Chihuahua. A soft and light spot, called a molera, can sometimes be found in Cheagles. Since Chihuahuas themselves have a variety of coating, the Cheagle could also end up with different coating, depending on their parent’s appearance. Beagles mainly have a double coat. Chihuahuas, on the other hand, can have either a long fur or a short one, and can have either a single or double layer coat. This means that Cheagles usually have a double coat and a few of them will have single layers.

Cheagles are small, portable dogs. They weigh about 12 pounds and are usually less than a foot tall. They are usually bigger than a Chihuahua but smaller than a Beagle.

It has the head of a Beagle and the snout of a Chihuahua.

Cheagles have round eyes that are dark brown. They usually resemble the eyes of a Beagle, and are not wet-looking like those of a Chihuahua.

Cheagles usually have ears like a Beagle, but a few of them resemble the upright ears of Chihuahuas. Their ears could come in a variety of pastel hues.

Cheagles usually have an overbite.

Cheagles have a body that resembles a combination of both their parents. They have a rugged appearance like a Beagle, and legs like a Chihuahua. Cheagles usually stand with their chest out.

The Cheagle’s tail is curled up on its back like that of a Chihuahua’s. Being alerted will cause its tail to stand erect.

Cheagles usually have one dominant, solid color, but there are a few who have coats with a mixture of colors.

The Cheagle enjoys being in spring and fall but is not very fond of winter. They tend to get cold easily. They also do not do well staying under the heat for long periods of time.

This tiny breed needs to live indoors. They can adapt in an apartment environment as long as they have some space to play or give them some time to go for a walk. They are fragile little dogs, so be sure to take care of them well.

The Cheagle has a mixture of Beagle and Chihuahua personalities. It is an outgoing, playful, and friendly dog, and is very loyal. Early training and socialization will prevent them from being aggressive to other dogs. These dogs are usually polite and well-behaved, but they can get a bit stubborn, especially when you start training them. Cheagles are usually quiet, but they can occasionally bark out of nervousness or exhibit the howl of a Beagle.

When they are with children, their attitudes may vary. Those who have more Beagle-like traits would be more playful, open, and affectionate to children, while those who take after the behavior of Chihuahuas may be less tolerant to loud behavior and hate teasing. Since these dogs are small and fragile, interaction with children must be supervised.

Cheagles tend to be excited and active, and can sometimes be very attention seeking, especially to their owners or family. They like to snuggle on the laps of people they are comfortable with. Like Beagles, they are fun-loving and playful, and like Chihuahuas, they can sometimes become overprotective towards a certain family member.

This trait makes Cheagles jealous at times. Being bred as a mixture of two dogs with different attitudes makes dealing with Cheagles a bit hard, but once you get to know them, you will be able to appreciate this tiny breed.

These dogs are usually well-behaved, but once they get excited, especially when playing, they can either howl like a Beagle or make a high-pitched bark like a Chihuahua. They love to go out, especially if they have adapted the instincts of the Beagle. However, it is best to keep them indoors since they are sensitive to extreme weather conditions. 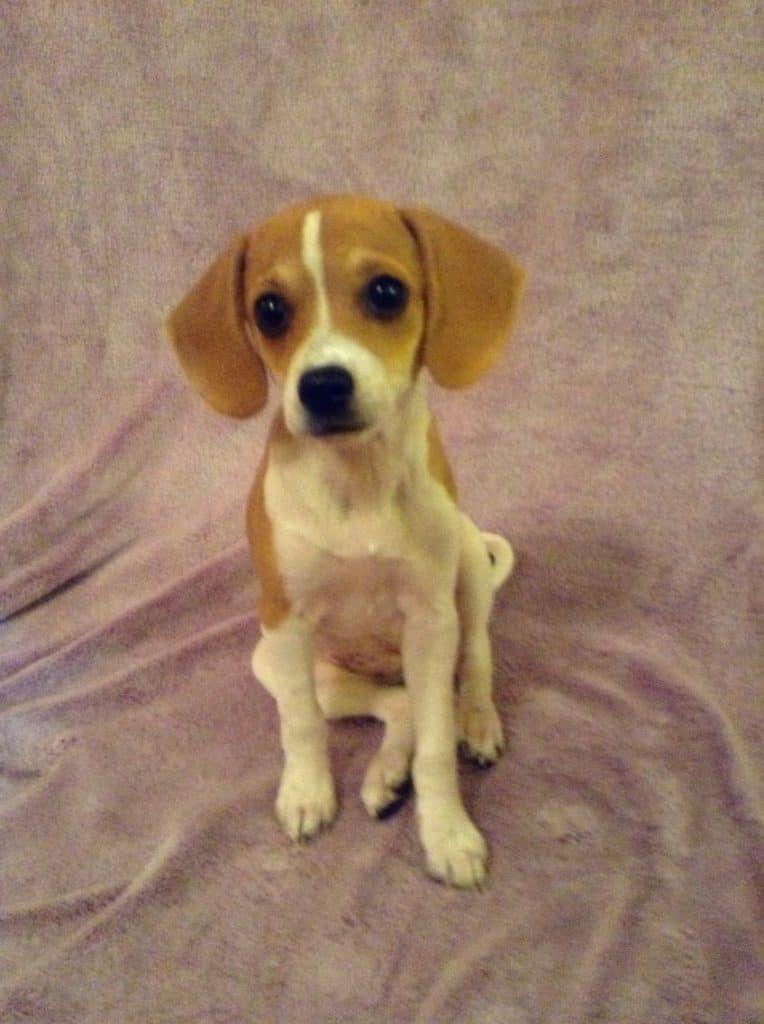 Cheagles do not require too much grooming in order to stay clean and healthy. Those with short hair and smooth coat usually require less grooming than others. These dogs are prone to having flaky, irritated, or dry skin, so baths should be given to them only when necessary. Be sure to use a mild dog shampoo to prevent any irritations. Cheagles do need to have their coats brushed with a solid comb regularly, just at least four times a week for short-coated ones in order to get rid of shed hairs and evenly distribute their body’s natural oils.

Those with longer coats may need to have a little more time to detangle the hair and leave it clean and shiny. It is also important to check its ears and keep it clean, especially if you have Cheagles with hanging ears, since these are more prone to infection. Also check their eyes and be sure to trim their nails when they get long.

Cheagles need approximately ¾ or 1½ cups of dry dog food for daily intake. Aside from this, be sure to give them the right amount of nutruition including fiber, protein, and vitamins in their meals. Giving your dog snacks or treats when they do well is also advisable.

Cheagles are not necessarily required to undertake rigorous activities. They are already satisfied with doing an hour of fun activities during the day. It is best if you break these activities into smaller chunks, such as doing energetic play sessions indoors or going on short walks. Some of them could do great in scent hound activities.

They are naturally active and energetic, so keeping them active is not a problem. They would enjoy going for walks daily or playing in your garden or inside your apartment. However, be sure not to take them out without a leash, because their tracking and chasing instincts might be triggered and you might have a difficulty catching up to them. Routine exercise helps keep them fit physically and mentally. Keeping them idle could make them aggressive and could lead to excessive barking.

Cheagles, being naturally energetic, could be a bit difficult to train. If you want to train them, you must be firm and strict. To keep them from being aggressive to other dogs, socialization and obedience training must also be given to them. It is best to train them while they are still young, so they don’t become as stubborn when they get older.

Since they could have a very sharp sense of smell, owners and trainers must know how to use them positively. Be sure to train them through positive reinforcement, because being too harsh could make them even more stubborn.

Cheagles health could be susceptible to diseases like hypoglycemia, hypothyroidism, chronic bronchitis, or epilepsy. They are also more prone to dental problems because of their small jaws. Skeletal problems are also a common problem for this breed. The average life expectancy of Cheagles is about 10-14 years.

Cheagles have a mixture of different personalities. They can be very loyal and playful, but can also be overprotective and affectionate. If you want to be a Cheagle owner, be sure that you know your dog’s strong traits and you must know how to enhance them. Owning one can be a bit of a challenge, but once you get close to them and train them well, having them for company can be enjoyable.

The Chorkie - A Cross between the Chihuahua and the Yorkshire Terrier
Pet Owner's Guide to the Chion
Cairnoodle: All You Need To Know About This Adorable Dog
The Poochon: Affectionate And Sociable
Lachon: Your Next Fluffy Cuddle Buddy
Tweet
Pin5
Share100
105 Shares