A Chizer is a crossbreed of the Chihuahua and Miniature Schnauzer – a perfect mix of its parent breeds. This breed is known for its playful and happy temperament. Chizers may not have been recognized by the American Kennel Club, but it proves to be one of the breeds to watch out for.

As mentioned, this breed is a cross of two parent breeds – the Chihuahua and the Miniature Schnauzer.

Sometimes referred to as a Schinzer, Schnauchi, and Schnauhuahua, a Chizer’s earliest existence can be traced to the 15th century. No one knows its actual date of origin, but the Designer Canine Registry officially recognized it in 2009. It was bred as a companion and a pet.

A Chizer’s looks is a combination of both its parents – how it will look will vary depending on the breed’s genetic breakdown. The dog can have the eyes of the Chihuahua, the beard of the Schnauzer, or both. This breed can have a litter of puppies that look different from one another. 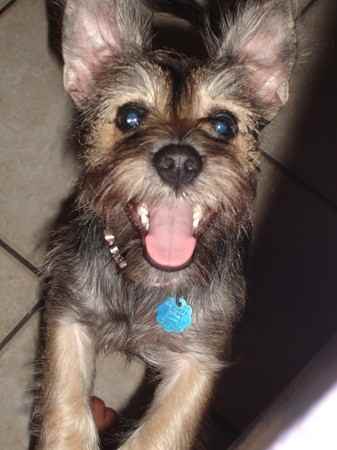 Generally, Chizers are dogs of small breeds. Heads can be long, round, or apple-shaped. Eyes are large and round. Noses are black and well-developed. The muzzle can be short, square or pointed with a slight under bite. Ears can be large, erect or pointed, or long and floppy.

Further on, their necks are likely to be short and bodies are slender. Legs can either be short or long, and tails can be longer or docked. Coats are often short, but there are cases when they are longer. Heads have softer fur compared to the body, which has coarse fur.

How big do Chizers get?

How big will a schnauzer Chihuahua mix get? The average height for both males and females is about 6 to 14 inches, while their average weight is around 4 to 15 pounds.

A Chizer’s life expectancy is around 12 to 18 years of age. It may seem short, but it’s actually above average compared to other dogs of small breeds. The breed is prone to various health issues, so you should give it enough attention. With proper care, Chizers will surely live longer.

A Chizer is a mix of the Chihuahua’s bold attitude and the Miniature Schnauzer’s active personality. This mix makes Chizers appear tough, but they’re actually sweet, intelligent, and gentle. You’d see how loyal they are to their human companions whenever they show their protective and possessive nature.

Chizers love spending time with their family members. They love getting affection and attention. They’re lap dogs that wouldn’t mind being cuddled, hugged, and kissed. They spend their time playing until they run out of energy and fall asleep. They will bond with the family closely and will want to be beside them all the time.

Chizers may be playful towards people they’re familiar with, but they’re shy by nature. Interaction with strangers and unknown dogs outside the family may be difficult to achieve unless the owners allow their Chizer to socialize with others at a young age.

On the other hand, when it comes to being with children, Chizers need a lot of work so they can get along with kids. Chizers are small dogs; kids can pick them up, manhandle and hurt them. Always have adult supervision, otherwise, accidental nipping and biting may take place. Again, early socialization will also help in this area. Ideally, the kid and the dog should grow together.

Chizers aren’t too picky with the environment that they are in. They wouldn’t mind being indoors and can adapt even in homes without yards. They can live in rural or urban environments. It can work well even inside a condominium or apartment provided it still has enough exercise. Chizers tend to be okay with solitude.

They wouldn’t have issues living in areas with warm climates, but they probably would end up shivering in the cold. Because of their small stature, they can’t really cope with cold temperatures. During these instances, it might be difficult to ask the dog to go outside and use the bathroom, or to have their daily walks.

Because they have issues with socialization and interaction, Chizers would be perfect home companions for single people as well as families that don’t have small children with them. They can also blend well in a family with members who will be willing to help train the dog and teach it how to act in the presence of small children.

Because of Chizers being prone to gastric problems and going over their set weight, a proper nutritional plan should be implemented for them. They are also prone to pancreatitis and tend to have a sensitive stomach.

The preferred diet for a Chizer is a cup of mixed wet and dry high quality and low-fat dog food. The dog should be able to digest the food easily so it won’t create gastric trouble for him. You should avoid overfeeding Chizers because they’re prone to serious weight problems.

A Chizer appears to have endless energy. To prevent Chizers from being too giddy, give them daily walks and play with them. These activities will challenge your dog physically and mentally and will meet their exercise requirements.

It’s important for Chizers to perform daily exercise because they have this tendency to gain weight, which can lead to health problems if not managed properly.

If you’re pressed for time, then you can just take the dog for a short walk even just a few times a day. If you can set enough time, then you could go for a walk in the park – perhaps the dog can even meet other dogs which could help it socialize and play.

Even with their small sizes, Chizers can jump high. Because of this, keep all areas secured, and be careful of fenced yards and windows.

Chizers are smart dogs; both of its parent breeds are known for their skills of knowing how to figure out things. Yet, the personality of the Chizer can make training difficult; they may even show stubborn behavior. They can be easily trained though if handled consistently. They have a fast pick up on things and can easily learn various commands.

Chizers are shy dogs, so if you want to train them to become sociable, you should do it at an early age. Upon adoption, training should already start. Behavioral training will also be of help. You should allow them to interact with other dogs, as well as be aware of how they should act around strangers. You can ask your trusted family members and friends to visit your home for your Chizer to get to know them.

It’s also important that you teach housebreaking or potty training. This may be difficult especially during those colder months; Chizers are uncomfortable with the cold and may not want to get out of the house. During these times, it may help to go for paper or pad training for the dog.

The protective nature of Chizers makes them good guard dogs. They are alert most times and can use their “voice” to let you know of any strange occurrences around the house. Their bodies may be small, but their barks are loud and strong. Their hearing is also extraordinary.

Both the Chihuahua and the Miniature Schnauzers are low to moderate shedders, hence, Chizers are too. Brushing is vital, especially in those families with family members that have asthma or other breathing problems. 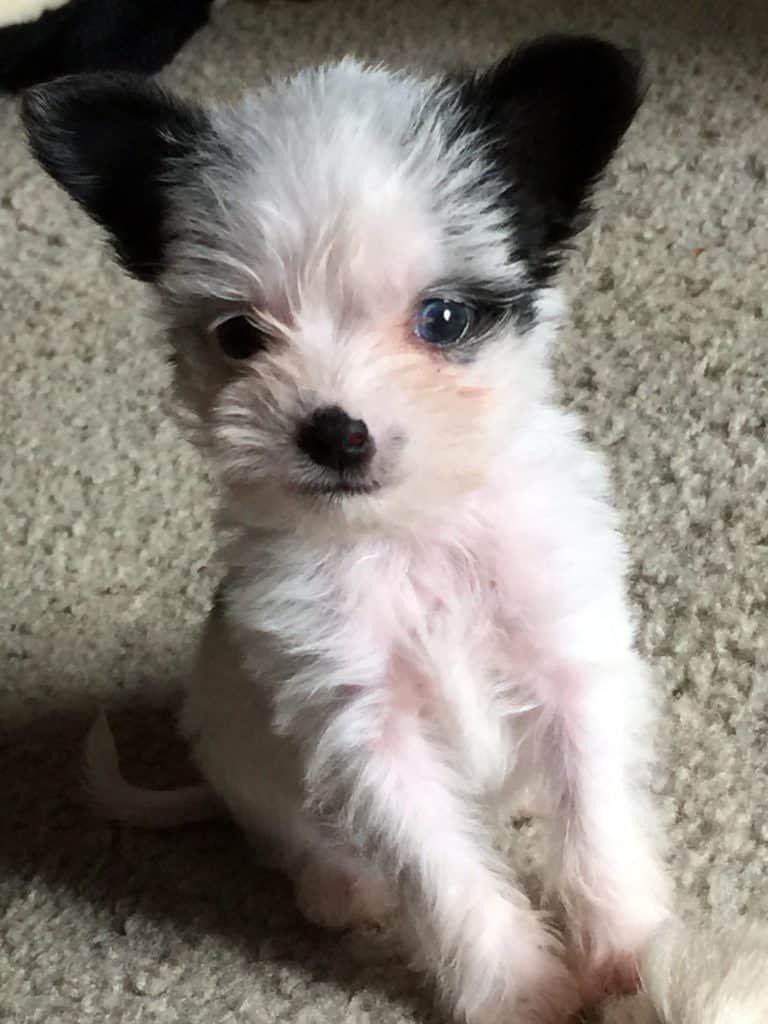 Bathing is not ultimately necessary; make sure though to give them a bath occasionally. Make sure that water doesn’t get inside the ears. Check the hair around the eye area: if grown, clean and clip them. The area surrounding the eyes should be cleaned using a wet cloth. The ears should be cleaned to avoid yeast infections. Nails should be trimmed, and teeth should be brushed. Grooming can be done by the owner also, rather than a professional groomer as long as they are willing to learn.

The Chizer generally is a healthy breed because of its hybrid ancestry. Yet, it can still inherit health issues from its parents. Chihuahuas are brachycephalic (i.e. with a short and broad skull) breeds, and so they can have eye and respiratory concerns, while Miniature Schnauzers are susceptible to kidney stones.

Chizers can be at risk of conditions such as diabetes, liver disease, kidney problems, as well as Von Willebrand’s Disease. Other minor concerns include arthritis, skin diseases, progressive retinal atrophy, pancreatitis, cataracts, and gastric dilation volvulus. It can also deal with seasonal allergies, while other occasional diagnoses include reverse sneezing.

A Chizer is a crossbreed between the Chihuahua and the Miniature Schnauzer. This breed isn’t well-known just yet, but it is starting to inch its way up the hearts of dog lovers everywhere. This is an ideal breed for those who live alone or for those who don’t have small children living with them.

With enough training and socialization, this breed will meet your expectations and make you happy as a pet parent. This dog, with its snuggly behavior and loving attitude, will surely make its mark on you for the rest of your lives.

Shichon: Sweet And Playful Teddy Bear Crossbreed
WooHoo For The Papipoo!
All About The Daisy Dog Breed
Please Meet The Papitese!
The Clever and Lovable Chipin
Tweet
Pin2
Share61
63 Shares