The Havashu is a cross between a Havanese and a Shih Tzu. This small ball of fur is always full of energy and a constant source of warmth and affection. It loves to snuggle and would easily accept the attention and adoration given to it.

Even with its’ energetic personality, it is quite easy to handle making it a perfect addition to any size of family and even an ideal choice for new pet owners.

The Havashu, as a hybrid, is not an official member of any of the breed categories but since both of its parents fall under the Toy Group category, it can be considered as part of this particular breed group. With only a small amount of data available, where and when this cross breed originated is still unclear. However, there is a high probability that it is one of the results of the designer dog craze of the 1980’s and 90’s in the United States.

As mentioned previously, the Havashu is a cross between a Havanese and a Shih Tzu, both of which are on the small side of the dog breed spectrum. One needs to look at the history of its parents to further understand the characteristics that the Havashu may have inherited.

The Havanese, also called as the Havana Silk Dog or Spanish Silk Poodle, is a breed that originated from Cuba. Havanese can be described as funny, intelligent, and outgoing breed. Due to their small and sturdy bodies, they can adapt to almost any living environment. Add in their sociable nature, they can be considered as the ideal city dog.

Havanese are quite the attention seekers. They enjoy any environment where they can be the center of attention of the people around them. With their small stature and playful personality, anyone would easily be caught by their charm. Havanese have distinctive physical traits that include a long silky coat and a plumed tail that is usually curled up and rested on its back.

Their bodies are slightly longer when compared to their height. This breed is also an excellent watchdog even with their small stature; they usually take this job seriously but with minimal amount of barking involved when detecting unknown individuals and threats.

The Shih Tzu trace their origins back to ancient China. Also known as the lion dog due to their long and gorgeous coat, in the past, this breed of dog spent their time sitting and accompanying emperors and royal families in the Chinese dynasties. This breed was highly valued and was only meant to be kept as pets by people with royal blood.

As time progressed, the Shih Tzu has become one of the most popular breeds of dogs because of their very affectionate nature attracting pet lovers from all walks of life. Shih Tzus are sturdy, affectionate, and playful toy dogs having a head well up, giving off a poised and proud look with a tail curved over the back.

The Havashu surely inherited some of the physical traits of its parents. Even with its small size it is sturdy as a breed. The male Havashu grows to around 9 to 12 inches in height while the female grows to about 8 to 11 inches. When it comes to their weight a male Havashu averages to 8 to 15 pounds and for the female they weigh at around 7 to 14 pounds.

The body of this breed is usually higher at their back end due to their hind legs being slightly longer. The tail of this dog is either held high or sometimes curled giving them a more adorable look.

Their head are rounded with plumed ears partnered with a short muzzle ending with a black or sometimes even brown button nose. The Havashu’s eyes are round varying in color either dark brown or amber, and are surrounded by black rims. When it comes to the breed’s coat, the color varies from brown, gray, cream, black, white or even sable.

This gives pet lovers a wide selection of color preference to choose from. Their coats are generally long, having a wavy or curly texture, but this may differ based on the preference of their owners. Having a shorter coat makes grooming this dog a lot easier. 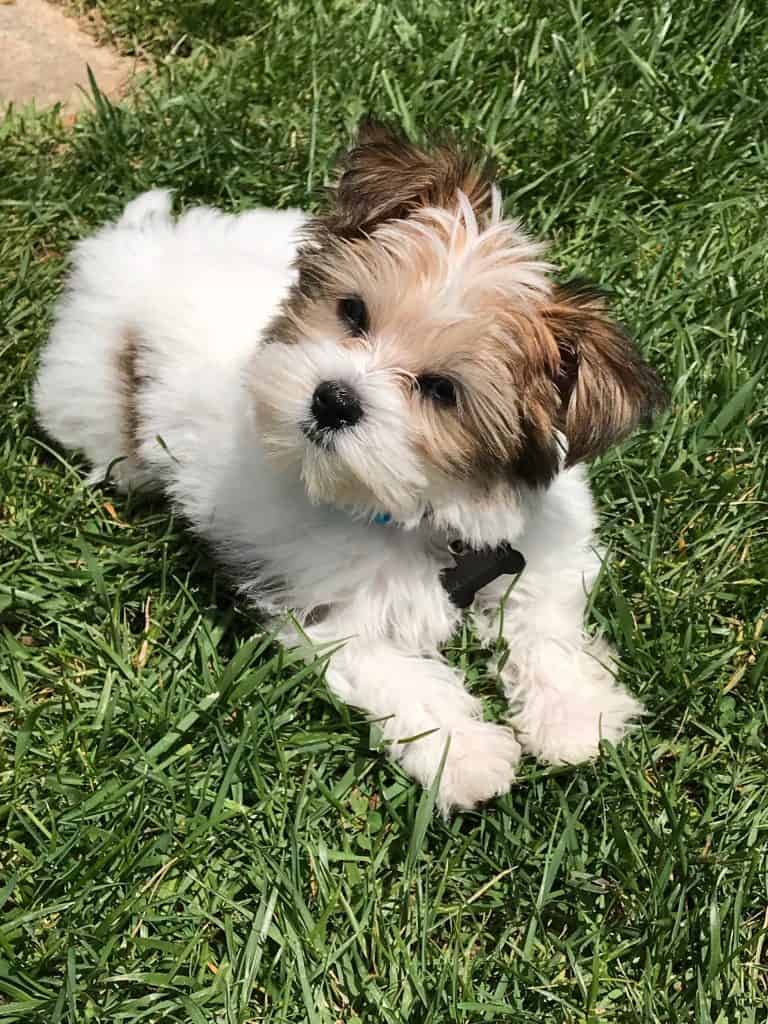 The average life expectancy for this particular breed of dog is around 12 years to 16 years. Depending on the care given them, their daily diet, and the time given for regular checkups. This estimate can easily change for better or worse.

The Havashu is a playful and cheerful breed of dog. It usually wants to play and have fun due to its abundant energy. Don’t misjudge its small body when it comes to energy, this dog sure has a vast amount of it stored. They can sometimes be clingy to the people around them, wanting to always follow and see what others are doing. This just shows how curious this little dogs are.

The Havashu display their alertness and intelligence by barking only when strangers arrive and set foot on the property or when they perceive any form of threat. Barking is also usually kept to a minimal for this dog unlike other breeds that just keep on until they tire themselves out.

This dog is considered quite good when it comes to being around children. Since they are sturdier than most small dogs, playing with kids can be in their advantage.

The Havashu breed is also

good with interacting and getting along with other dogs and pets as long as they have been socialized well. Otherwise this breed might just end up running around the area chasing anything it sees that moves because it considers it as a fun activity.

One known trait that the Havashu exhibit is having moments where they can be a little hyperactive as if they are bursting with energy.

At other times, just like any other dog, this breed can end up sulking and hiding especially when they are told off for doing something bad.

Just like its parents, the Havanese and Shih Tzu, the Havashu can be a little headstrong and stubborn so some form of obedience training should be done early on.

Due to the Havashu’s small size, it can easily adapt to however big or small the living area available. It doesn’t necessarily need a backyard or small outdoor area, but having one can be a treat for it so that it can run around to its heart content. even in an apartment, this dog can fairly adapt as long as it can have daily walks outside and sometimes play in a park or any open area outdoors.

A single cup of dog food per meal is sufficient for this dog breed. It is recommended to watch the dog’s calorie consumption and weight level to avoid it becoming overweight, which can ignite certain health problems. Dog treats should also be given in moderation. Treats are usually given during training sessions as an aid to encourage obedience, but giving too much can cause obesity.

Keep table scraps to a minimum amount and specially avoid giving cooked bones and food with high fat content. It is recommended to learn about which foods are safe for dog consumption and which ones are to be avoided. Also, a regular checkup to the vet can help in monitoring the dog’s weight and diet.

Most of the Havashu’s physical activity would be centered on its indoor play and following the family around the house, but taking it out for a walk twice a day outside is still recommended specially if you are staying in an apartment or a place without any outdoor recreation area.

Having a backyard is not a necessity for this dog but if one is available it can be a good area for it to run around and bun off its extra energy.

This dog breed is moderately easy to train compared to other dogs since the Havashu is intelligent, responsive, and always eager to please the people around him. Remember to always use gentle and consistent methods in training your dog.

Give dog treats in moderation and never forget to praise and encourage your dog while training him. Early socialization and training is an important stage in a pet and the owner’s life since it would determine how easy or hard your relationship can become.

The Havashu has moderate needs when it comes to grooming. This breed doesn’t shed that much but regular brushing is recommended to keep the dog’s coat in good condition. About three times a week should be sufficient to maintain a healthy coat. The inner ear should be checked regularly for any form of inflammation or infection.

The Havashu can inherit some health problems from its parent breeds. The major concerns include Patellar Luxation, Chondrodysplasia or canine dwarfism, bladder stones and Mitral Valve Disease. Some of the minor health concerns include bone and joint problems, allergies and umbilical hernias.

The way to lessen the odds of this happening is to get a healthy dog from a trusted breeder and also to have regular visits to the veterinarian.

Where Can You Get a Havashu?

Since the Havashu is a designer dog, of which there are an increasing number now today. It is not that hard to find breeders around. Majority of the breeders of this dog are found in the United States, United Kingdom, Canada and Australia. Make sure that before buying a designer dog like the Havashu, deal with trusted breeders to avoid marked up prices and low quality puppies.

Always remember that with this kind of breed, there is no control over genetics so the Havashu may turn out to be more like one parent or the other in terms of appearance and personality.

The Havashu is a designer dog with the characteristics of both the Havanese and Shih Tzu. With its adorable looks and bountiful energy, it can make any person enjoy its company. Being an ideal companion for a family of any size or for a new pet owner due to its personality and adaptability, the Havashu surely is a dog that you should look for and consider.

Is A Peagle Right For You?
The Spirited, Lively and Ever-Curious Yorkie Pin
What The Heck Is A Mauzer?
Just A Schweenie Little Dog
A Havamalt Will Make Your Heart Melt
Tweet
Pin5
Share51
56 Shares