The Shih Apso is a mixed dog breed of the age-old purebreds— the Shih Tzu and the Lhasa Apso. Like its parents, it falls within the toy dog category. They also got their parents’ trait of being great house dogs who are good with kids and love to follow family members around. They are deemed suitable and adjust well even to first-time dog owners.

This lovable mix breed is also called the Lhasa Tzu. And while it is not a qualified and recognized dog breed by the American Kennel Club, other organizations like the American Hybrid Club, the Designer Dogs Kennel Club and the International Designer Canine Registry have already recognized the breed.

Nonetheless, like any other dog breed, it is important to do some research and get to know the dog before you decide to get one.

This little lap dog is a relatively new breed. While its parents have been around for centuries, it was only recently that breeders started crossing the Shih Tzu and the Lhasa Apso.

Both parents have a long and proud history as the Lhasa Apso has been considered a sacred dog by the Tibetans while the Shih Tzu has been a favorite breed in the royal court of imperial China. Both breeds share a lot of commonalities. However, it remains unclear when and how the first Shih Apso was bred.

The handy size of the Shih Tzu makes it easy to carry around, even for kids. Its long mane also makes it appear more huggable.

Aside from its appearance, the Shih Tzu also has a very friendly temperament. This dog is known for living to follow his owner around. Though it cannot be trained as much as the other popular dog breeds, the Shih Tzu can still be a fun companion that can play fetch and the like.

The other half of the breed is the Lhasa Apso. Its appearance is quite similar to the Shih Tzu as it also sports a long mane and is among the small dog breeds. A major difference though, lies in the shedding. Shih Tzus tend to shed heavier compared to the Lhasa Apso.

However, the Lhasa Apso’s personality is quite different. The Lhasa Apso is more independent and requires less attention. As a guard dog, the breed is more careful about getting too friendly to strangers. They are known to be a smart breed but can be quite stubborn owning to their independence.

It’s actually quite easy to confuse a Shih Tzu with a Lhasa Apso as there are a lot of similar traits. However, there is a main difference in size as the Lhasa Apso is about 1-2 inches bigger than the Shih Tzu. Much like its parents, the Shih Apso is also likely to be a small dog. A mature one would be about 9-12 inches in height. Its weight plays around 12-18 pounds.

These small dogs usually sport light colored, thick and hairy coats. Common shades of fur include tan, white or gray or a combination of these shades. Most of them are light to moderate shedders.

Their faces usually follow the squashed face appearance of their Shih Tzu parents. You shouldn’t be surprised to see darker markings or patches around the face area.

This dog breed typically has longer mane around the face area and sometimes sports what appears to be a moustache.

The breed’s ears are long and floppy and they have a short stubby tail. It takes after both parent breeds as it also has a lion-like structure.

With just the proper care and maintenance, Shih Apsos can live for around 12-15 years.

This breed may be a small dog but it has a huge personality. It is just as smart as its parent breeds. However, the Lhasa Apso’s stubbornness is prominent among his cross breed offspring.

The Shih Apso is known to easily adapt and get close to members of the family. They are known to be quite the clingy types. They love to be around their humans so much and most have been observed to suffer from separation anxiety.

Like its Shih Tzu parents, this breed is an ideal lap dog. It loves to be carried around and enjoys lounging in its owners lap. Meanwhile, it owes its loyal and protective trait from its Lhasa Apso line.

With the blood of a guard dog, this breed tends to be wary of strangers. They also tend to be of the jealous type. They wouldn’t want to share their owner’s affection with others. It would be helpful to train and socialize them while they’re still young.

With its size and family-friendly traits, the Shih Apso proves an ideal apartment dog although it would also do well in larger spaces. The breed thrives in small spaces as it makes it easier for them to follow their owners around. They are also best-kept indoors for hygiene and grooming purposes.

This breed’s diet would largely depend on its individual requirements— age, size and activity level. Nonetheless, a typical diet for this breed is composed largely of protein along with about 14% of fat.

However, owners should be mindful when feeding this breed as it is prone to obesity. You can consult your vet for the ideal meal plan for this breed. It is a must to avoid free-feeding and limit the dog’s meals to about 2 or three feedings per day.

The breed may be tiny but it is full of life and energy. This means it would require exercise or physical activity. If kept free-roaming in a large space, it won’t be necessary to schedule regular walks. However, if kept in an apartment, regular playtime and taking short walks would be necessary.

Visiting dog parks that allow dogs to roam off leash is also a good idea. Note that they are prone to obesity so balancing food intake and exercise is a must.

Both the Shih Tzu and the Lhasa Apso are stubborn breeds. This means their offspring is also quite stubborn. Although intelligent and highly trainable, it would require a lot of patience in order to completely train them. House training can be challenging so it is best to start them young.

The key to training this breed is consistency. Regular training is required and everyone in the household should get involved. You should be clear as to the behavior that you want from your dog. Establish a rewards system that best works. Food is a good motivation for this breed but praises here and there could also help.

As soon as you get the puppy slowly start training them. House training is a priority. After which, you can start socializing them taking them out to dog parks is a great way to both exercise and at the same time expose your dog to new environments. It allows them to learn how to behave when meeting other dogs and new people.

Like the Lhasa Apso, the breed has low to moderate shedding. However, daily brushing is recommended to keep its coat silky and avoid any tangles.

The Shih’s long mane also requires regular trips to the grooming shop in order to maintain its length and keep it tamed. Professional grooming is recommended at east once every month.

In terms of giving baths, you can have it together with their monthly grooming session.

The Shih is known to have very subtle or no body odor at all so their hair is also required to be washed at least once a month.

However, their ears need to be wiped clean at least once every week in order to make sure it is free of any debris. Dirt build up in the ears can spell trouble and cause ear infections. Some owners likewise prefer to brush their dog’s teeth to prevent cavities and infections. 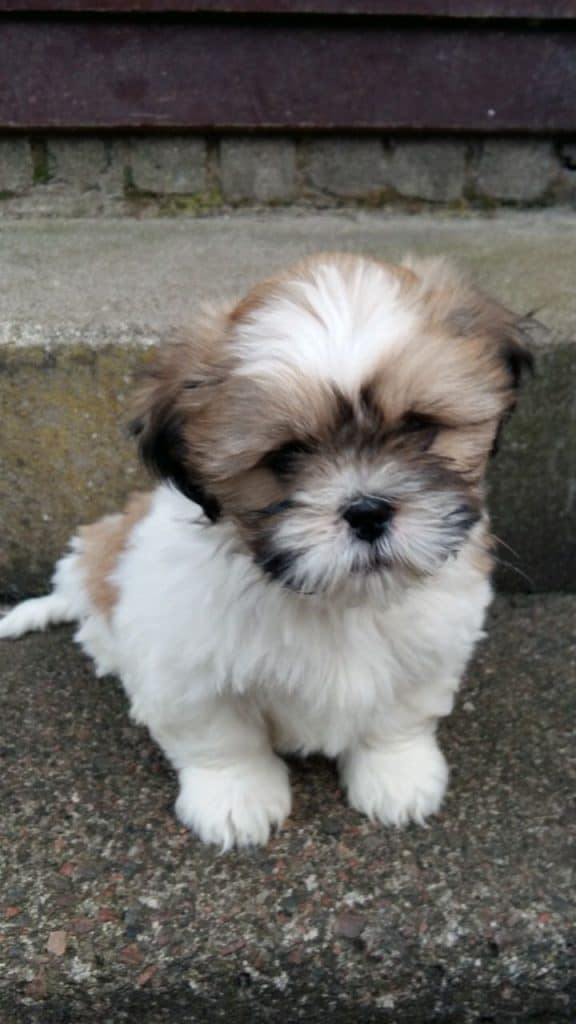 The Shih Apso is generally a healthy breed with very few health concerns. However, owners should be mindful of the common issues that the pup might inherit from its parent breeds. Be mindful of joint issues, hip dysplasia, kidney and bladder problems.

The breed could also take after the Shih Tzu parent’s breathing problems. Since they have that squashed snout appearance they are prone to Brachycephalic Airway Syndrome.

Dogs with short snouts have an anatomy that could limit their airway functions. Their small noses could actually restrict the amount of air that they can take in. It is important to have the Shih Apso checked for any of these medical concerns so they can be addressed early.

Where to get one

While it is not a recognized dog breed as it is a mix of two other pure breeds, there are now several kennels that specialize in designer dogs. Being a recognized designer breed, it would be easy to find one. Just be sure that you’re buying from a trusted and registered breeder and your pup has the necessary papers and documents.

It can be trained to socialize and has low exercise requirements. It also requires training when it comes to getting along with other dogs and family members, especially kids. Its size makes it a great apartment dog.

However, the breed is prone to obesity and requires moderate grooming and maintenance. It sheds moderately so grooming is necessary.

The Shih Apso is inclined to suffer from separation anxiety and tend to be the jealous type. Training is required in order for the breed to overcome these issues.

Overall, the Shih Apso is a small but adorable breed that’s known for being highly devoted and extremely loyal. It loves cuddles and enjoys being around the people it likes most.

WooHoo For The Papipoo!
How To Care For Your Taco Terrier
Pekachi: The Affectionate And Devoted Companion Dog
Just A Schweenie Little Dog
Beagi: A Cute Friendly Pup
Tweet
Pin1
Share177
178 Shares